The new iTunes app called “Tug of War on Drugs” delves further into the debate raised by the thought-provoking and controversial documentary How to Make Money Selling Drugs. It’s nice to see a mobile app for a documentary (or any kind of film for that matter) that expands on its premise in ways that evoke further conversations on the subject. Find out more about the movie and its app after the jump.

The new film How to Make Money Selling Drugs is an insightful and shockingly candid documentary on how a drug dealer can rise to cartel lord with extreme ease and the underlying corruption that exists in our continuous war on drugs. The film is told from the perspective of former drug dealers and features interviews with rights advocates Russell Simmons, Susan Sarandon and David Simon (creator of “The Wire”). As a companion piece to the film, the new app “Tug of War on Drugs” was released as a way to give audiences a chance to join the conversation and learn what other people think about the war on drugs. The app was developed in partnership with the Emmy Award-winning interactive agency Secret Location, the Drug Policy Alliance, the Tow Center for Digital Journalism at Columbia University and Tribeca Film.

The app features the latest breaking stories involving the war on drugs and users can vote on how negative or positive their feelings are on each article subject. You do this by simply moving a marker towards the “Like” or “Dislike” icon on either end of a rope to show your level of approval or disapproval. Here’s a screen capture from the app to show you what I mean: 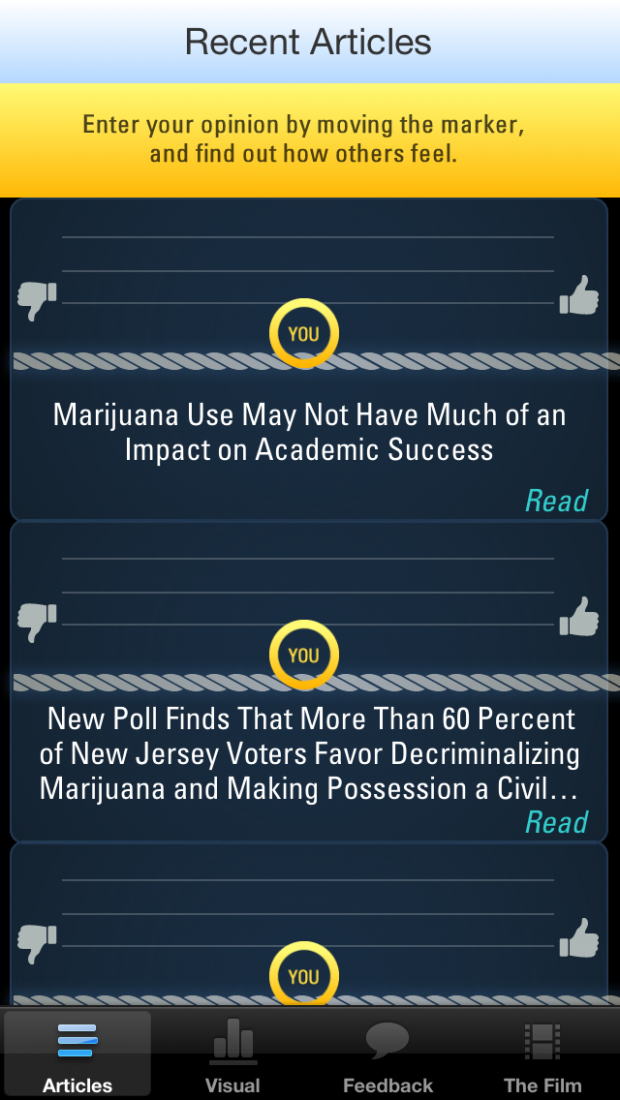 Once you lock in your positive or negative feedback on a subject, your answer becomes part of an ever-changing data visualization that reveals people’s shifting opinions on the war on drugs. The app also allows you to give feedback to the creators to let them know what you think of the app, what types of info you’d like to see more of and what features you’d like to see in future updates.

If you’d like to check out the app for yourself and dig deeper into the ongoing debate, it’s available for free mobile download on iTunes.

Directed by Matthew Cooke and produced by Bert Marcus Productions, the new documentary How to Make Money Selling Drugs began it’s theatrical release in New York City on June 26th and the film expanded nationally to other cities on June 28th. A full list of theaters can be found at their official website. It’s also currently available for rent on iTunes, Amazon, Vudu and Google Play.