Are you tired of our Comic-Con News Round-Ups yet? Too bad, we have more! First of all, San Diego has tons of parties for the convention, and THR has a pretty thorough list. Also, if you are a fan of SyFy’s Defiance or Warehouse 13, we’ll be doing some interviews with the cast and crews, so head to Reddit to give us the questions you want to be asked. After the break, we have news on a few things, including a free cereal bar, Domo collectibles, and more.

The King of the Nerds Cereal Bar will be open to the public from 8 AM – 4 PM Thursday, July 18 – Sunday, July 21. The cost is FREE. Guests will encounter a long wall of cereal dispensers containing a vast array of breakfast favorites. A branded commercial-grade milk dispenser will top off bowls
· 32 different types of cereal
· 20 different toppings
· 5 milk options 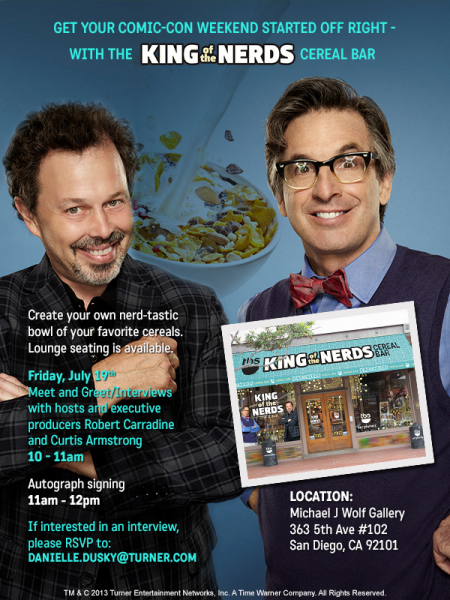 This mobile app will also serve as the platform for the official launch of Shout! Factory’s Superhero Time Machine, the newest iOS app from the team behind the immensely popular Video Time Machine app.  Featuring more than 2,000 hand-selected videos, Superhero Time Machine allows users to watch the evolution of their favorite superheroes through the years, via videos dating as far back as 1941.

In addition, Shout! Factory will launch the “Superhero Costume Gallery” through its convention mobile app.  By submitting their own photos, as well as photos of others dressed in amazing superhero costumes, fans in attendance at Comic-Con 2013 will be able to create a real-time digital census of which superhero costume is most represented at the convention.

“This unique digital initiative is a great way for Shout! Factory to share its passion for Comic-con with our many loyal fans as well as make it easy for attendees to keep up with all our activities,” said Jeffrey Thompson, Shout! Factory’s Vice President of Digital Strategy & Business Development. “Plus our Superhero Costume Gallery is a great way to kick-off the Superhero Time Machine app, an experience we’ve carefully curated because of our love for the genre.”

Participants in the “Superhero Costume Gallery” will also be able to download a free version of the Superhero Time Machine and become eligible to win a super-huge superhero giveaway courtesy of Shout! Factory.

July Systems is redefining how businesses go to market with mobile. July’s award-winning cloud-based mobile application platform is used by some of the world’s best-known brands to reach more than 140 million users in 150 countries and deliver billions of transactions annually. July MX, the company’s 4th generation platform, is a first-to-market self-authoring mobile experience platform for creating and publishing mobile sites and applications quickly, without reliance on coding skills or technical expertise. Started in July 2001, the company is headquartered in San Francisco with offices in Bangalore, New York and London. 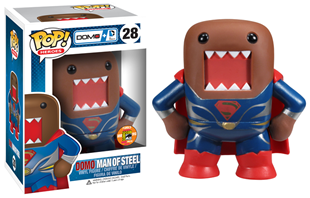 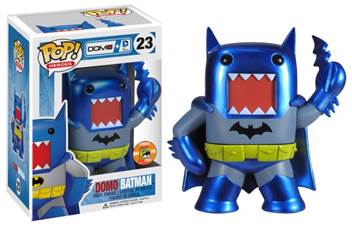 Earlier in the year pop culture sensation Domo took flight alongside some of DC Comics’ most admired Super Heroes with the “Domo X DC” line of unique 4” Super Stylized Pop! Vinyl Collectible Figures from Funko (in partnership with Warner Brothers Consumer Products). Now just in time for San Diego Comic-Con (SDCC), Domo is about to suit up one more time with a pair of special limited edition collectibles featuring the Man of Steel and Dark Knight!

Priced at $15, Domo “Man of Steel” will feature the viral meme posing as the latest big screen incarnation of the comic icon. Based on the new “Man of Steel” movie, this collectible figure puts Domo in the same costume worn by Henry Cavill in this summer’s box office smash. At the same time Funko will also unveil for $15, Domo “Batman” Metallic, a new and sleek look that will serve as a fun variant of the original “Batman” Domo and a great addition to “Dark Knight” Domo.

DC Comics won’t be Domo’s only ally during Comic Con…get ready for another team up with Dark Horse for the limited edition introduction of “Caveman Domo,” which retails for $9 and is part of the company’s successful Qee line of 2” figures.

Fans can also take home two new plush versions of the viral icon with the white “Indomitable Abominable Domo” & green “Electric Slide Domo.” From Big Tent Entertainment and only available at SDCC, the products are available for $20 each or combined for $35.