One of the major themes of Robocop is the idea of what exactly would happen if robots were our security. That theme rings true today, especially since the military uses drones to do surveillance. The idea of Robocop is more relevant today than anything, but that won’t t stop director Jose Padilha from making the classic film fun just like it was when the very first one came out in 1987. The original one while not perfect was a genuinely fun action film and one that stands above the rest of that action films that are even released today.

Hit the jump for more.

The panel opens up to The Novak Element, a news program that mirrors the likes (or lies) of shows like the ones we see on cable tv. Pat Novak (Samuel L. Jackson) is presenting his case for why humans need robot protection. We cut away to Tehran where a news crew is following the military and robots who are subduing the residents to make sure there are no impending threats. While the the citizens seem to have “embraced” the newfiund culture of random checks by robots, here in the states Novak asks why Americans have become “robophobic?” And we soon find out why.

The clip then cuts to Raymond. Sellers pitching his case to expand the robot program to the states. Whereas the head of the Senate is no so welcomed to the idea and then opens back to the news segment where we see the robots go haywire and kill the citizens, military, and possibly the news crew as well. “If a machine killed a child, what would it feel?” Sellars replies, “Nothing.” 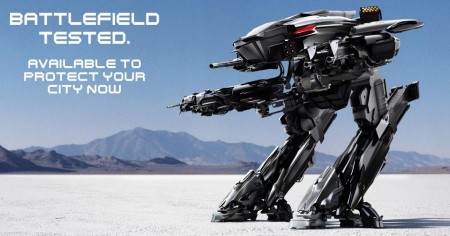 The first trailer in the film was a bit hard to get all down, but here is the jist of it. We see that Alex Murphy is a family man. He has a son and a wife (Cornish). It pretty much looks like they are the perfect family, until Murphy goes out to investigate his car alarm going off, and in an instant that he turns it off, a bomb explodes. We then see him hooked up to a wide variety of machines keeping him alive, but Doctor Norton (Gary Oldman) is explaining to Murphy’s wife that he can keep him alive despite that he has fourth degree burns over a majority of his body. It is there that he is transformed into the Robocop, a machine that uses human bodies to give the robots a conscience. During a test run we get to see a first POV style scene where Robocop is surveying the area for enemies and the test seems to be a success. But then we start to see the characters panic a bit, his humanity reaches out but his programing suppresses it as well. Not a lot of options for someone that wants to stay human.

During the Q&A panel, Jackson said that his character, Pat Novak, was likened to “Rush Sharpton.” He describes that character as guy who has an opinion and is not afraid to state it and uses every method available to get people to agree with him.

Keaton said that his character was rich and a “big thinker” and kind of compared him to the likes of when he played Bruce Wayne in the very first two Batman films. It’s not that he is completely wrong, but he believes that robots do not need the human element because humans will make the mistakes but the machines won’t.

Kinnaman tells us that Robocop’s social interaction is broken down to two things. Visor up means he wants to talk, but when it is visor down he wants to kill.

Overall. Nothing will ever beat a classic action movie like Robocop, no matter how many times you reboot it. But as Padilha explained all you can do is make it more relevantto today’s audience, and that couldn’t be more true today. With our military’s reliance on things such drones, it should be interesting to see where Padilha takes Robocop and turn a relevant story tat affects us today into a film that can be fun to watch.