Mega Panel Saturday continued on Saturday with 20th Century Fox in Hall H. The studio featured Dawn of the Planet of the Apes, The Wolverine, and X-Men: Days of Future Past. We were there for it all, so check out our highlights after the break.


Dawn of the Planet of the Apes

The panel included director Matt Reeves and cast Jason Clarke, Keri Russell, and Andy Serkis. Reeves is new to the franchise, but he was obsessed with Planet of the Apes as a kid. He saw Rise of the Planet of the Apes and felt emotionally like one of the apes. Serkis’ challenge in playing Caesar this time around was the responsibility of leading this new society. He’s a kind leader and has wife, teenage kid, and possibly an infant. What’s also interesting is that the apes are utilizing sign language to communicate as well as speaking. Russell said she joined the project because of Reeves (they worked together on Felicity). The film takes place years after the outbreak, so there are two communities (humans and apes) trying to survive. Stuntpeople trained in parkour and Cirque Du Soleil were hired to do live stunts for the motion capture on apes. We got to see a teaser that features Clarke entering the forest community inhabited by the apes and calling for Caesar. The camera pans up to show an older Caesar with war paint on his face, and he looks pissed (as you can see below). Gary Oldman’s voiceover explains the humans spent four years fighting the virus and another four fighting each other. 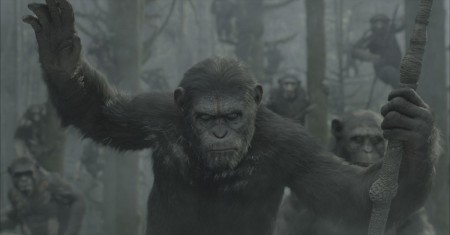 James Mangold came out to talk a bit about The Wolverine. He wanted to make a movie that was only about Logan. He also claimed that this is probably the best shape Hugh Jackman has ever been for a movie. We got to see a new trailer, which really showed how brutal Wolverine can be. After playing it again, Jackman came out to huge applause. He said he wanted the film to be completely fresh and that you’ll finally get to see the famed berserker rage in full. Mangold explained that Wolverine’s look changed a bit in this movie. His hair is shorter and the look of the claws were tweaked to make them more deadly. When reminded that he will have played the role in seven movies by next year, Jackman called it one of the best roles ever and he would never give it up.

We transitioned into this panel by having Hugh Jackman introduce Brian Singer, the director of X-Men: Days of Future Past. They showed a sizzle reel that shows Wolverine going back in time to convince a younger Professor Xavier to do something (not explained) in order to change the dystopian future. Wolverine is grey, but he says he will be going back into into his younger body, so it’s not exactly physical time travel. It’s a great trailer, but doesn’t give away much. We are then introduced to the rest of the panel, which included co-writer Simon Kinberg, producer Richard Donner, and what seemed like the entire cast: Jennifer Lawrence, Nicholas Hoult, Anna Paquin, Ellen Page, Peter Dinklage, Michael Fassbender, Halle Berry, James McAvoy, Evan Peters, Ian McKellen, Patrick Stewart, Shawn Ashmore, and Omar Sy.

Singer likes ensemble movies (see: The Usual Suspects) even though this was a scheduling nightmare. With the two sets of casts from different timelines, Jackson said this was two great movies in one. Stewart said he was honored to be part of two great cast ensembles in his career (Star Trek & X-Men). McKellan announced that he and Stewart were going to do two plays on Broadway. Berry likes that her character is sort of the mother figure for the group, though she doesn’t get an romantic love. The Producers called this the best cast ever assembled for a film. There were a lot of questions that couldn’t be answered, including ones about Deadpool, Gambit, and even Quicksilver (who is in this film and Disney’s The Avengers: Age of Ultron). 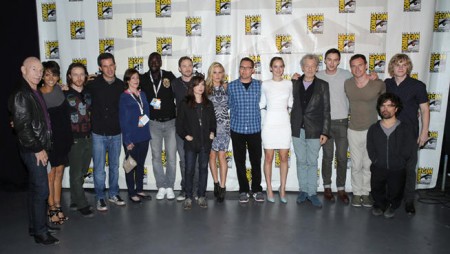