There is still a lot of production to complete for Guardians of the Galaxy, but that didn’t stop writer/director James Gunn, Chris Pratt, Zoe Saldana, Benicio Del Toro, Dave Bautista, Karen Gillan, Michael Rooker, Lee Pace,, Djimon Hounsou, and Marvel Head Kevin Feige from coming by Comic Con to tell their fans what it’s like to be in a film about the intergalactic anti-hero squad.

During the press conference we learn how much has actually been shot, when we should expect to hear of casting announcements, the benefits of having a big budget, the training regiment for and the weird and wonderful aspects of their respective characters. Hit the jump for more. 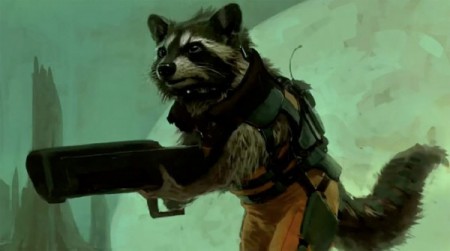 Question: James, is there any chance you might make an announcement soon about casting for Rocket Racoon or Groot?

What’s the basic moral premise and conflict of Guardians of the Galaxy?

Gunn: Guardians is about a family coming together. It really is about a group of individuals who have acted selfishly and only as individuals, throughout their life. And they learn something about themselves that makes them heroes.

What has your experience been like on set, with this big budget?

Gunn: That it’s easier. With a movie like Super, there are a lot of people on set who I think I can do their job better than they can. With a movie like this, we worked really hard to find the best, whether it was the best actor for each of these roles, which we worked really hard at, but also the best production designer, the best composer and the best costume designer. They all make my job a lot easier on this movie, then it’s been in movies past.

Chris, what was the extent of your training to get your body into the physical shape it is now?

Pratt: Oh, man! It was about six months, and a combination of different things, like lifting weights, cardio and really strict nutrition. It’s some really boring stuff. Basically, I cried 40 pounds of, and the rest was being hungry and running a lot.

Dave, how strong is Drax the Destroyer, and can he beat up Hulk and Thor?

Dave Bautista: I would have to say yes, on that.

Saldana: Have you seen his hands? For the love of god! If it’s raining, I just tell Dave to put his hand over my head.

Bautista: This part is, by far, the biggest thing I’ve ever done, in my life. To be a part of this is really a dream come true. I really come from nothing. I’m a poor kid from the streets. What I’ve been able to achieve has really just been through hard work and not letting anyone tell me that I couldn’t do something. I always try to encourage people to just pursue your dreams.

Has anybody gotten hurt on the film?

Saldana: Well, we still have 85% of the film to shoot, so we could. I think there is going to be a great deal of soreness and muscle cramping and sweating, but it’s gonna be great. We’ve all been training for it and rehearsing, and had endless conversations with our director, as well as talking to every department that’s building us together. [Some of us] have so much make-up to do, constantly, with retouching, every single second. There’s a lot of work put into it. I’m just excited to be doing something different. This is sort of like the anti-hero, hero movie. When you meet these characters, they’re thieves, they’re rebels and they’re assassins, but they’re gonna be learning very big lessons. Because it’s a James Gunn interpretation of Guardians, the levity will be very abundant, and that’s what keeps it awesome. My 10-year-old niece just visited the set, and when we both walked into one of the sets they had built, we both had the same expression and we were both drooling. It was insane! 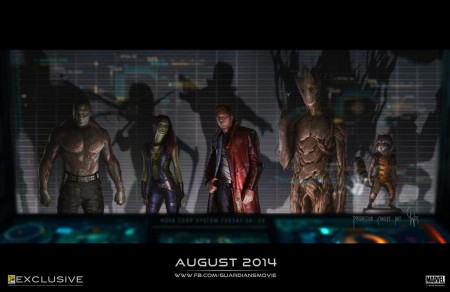 For the actors, what is your favorite weird and wonderful aspect of your character?

Michael Rooker: There’s a lot of me in Yondu. When I first read the script, I noticed right away that there are some aspects of Yondu’s existence within this universe of ours that were very, very close to me. For example, the tough love that I have towards some of the other cast members. I’m very much like that in my life, as well. I hardly ever do make-up, in the movies I’ve done, except on James Gunn movies. This one is about two-and-a-half hours. To me, that’s a very interesting aspect. When I get mad, I turn red. When I get embarrassed, I turn red. When I get turned on, I get red. And I want the audience to see that, in the character. So, if the character is getting mad, getting upset or getting turned on, you’re getting to see that in the facial tones and the skin tones. That’s what I enjoy about acting. It can be very subtle, like that. With a lot of make-up on, you can’t see a lot of that, so I prefer to have no make-up, at all. But, not in this one. I’m very excited to be involved with this.

Djimon Hounsou: I play Korath, who is a humanoid. I have a 4-year-old son, who loves all the superheroes from Spider-Man to Batman to Iron Man. He’s got all the costumes. And one day, he looked at me and said, “Papa, I want to be light-skinned, so I can be Spider-Man ‘cause Spider-Man is light-skinned.” That was a shock to me. I’m extremely excited to be a part of the Marvel universe, so that I can provide a diverse outlook of superheroes or bad guys in those stories. It’s important for us to be part of that, and specifically for me. That was my in ticket to the Marvel world, and I’m excited.

Lee Pace: I play Ronan the Accuser, and it’s a character that’s been around since 1967, when he first walked into Fantastic Four. So, there’s a lot of incredible story that I’ve gotten to research. If you call reading comic books research, I guess I’ve been doing my job. I start work this week, filming the character, and I’m just really excited to make a villain that is complicated. There’s a core to him where you can find something that you can understand. I don’t know. He’s pretty bad, though. It’s the early days, so I’m just putting the first wall up and we’ll start there.

Bautista: I play Drax the Destroyer, who is also a pretty bad dude. Drax is full of rage and he’s full of honor and he’s very literal. I think the best thing about Drax is that he’s hysterical without meaning to be. That’s what I love the most about Drax.


Pratt: For Quill, without blowing too much of his origin, or anything like that, there’s a petulance to him. He hasn’t really been held accountable, as an adult. He’s been able to be free in space and do whatever he’s wanted to do. That’s really fun because it means that he’s slept with all these super weird aliens. That’s my favorite weird element of the character. It’s just very wonderful. But, my favorite moment that I’ve had was when I first donned my full wardrobe in the costume department. I put it on and it was just like, “Wow!” I wore it, and I thought that was pretty wonderful. All of a sudden, my walk changed, a little bit, and I had a little extra bob in my head. That was pretty cool.

Karen Gillan: I play Nebula, and she looks pretty weird. One of the most interesting things about the character, for me, is her very strange and complex relationship to Gamora.

Benico Del Toro: I play The Collector, and he collects things, like I do. I think it’s pretty cool that he’s got his own personal zoo. 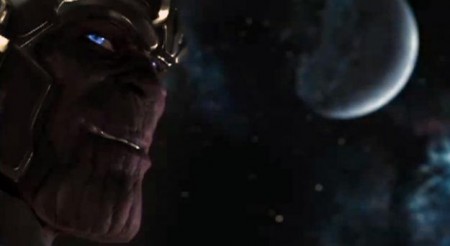 James, as they expand the Marvel universe, will there be a connection between the Guardians and other Marvel movies?

Gunn: Well, we have Thanos.  Thanos is the thing that connects us to the Marvel universe, at this point.  In the future, we’ll see what happens after that.  But right now, we’re connected to the rest of the Marvel universe because of three seconds at the end of The Avengers.

Marvel’s Guardians of the Galaxy opens in theaters on August 1, 2014.