Hopefully you were one of those who faithfully followed our coverage of the Apollo 18 viral campaign. If not, you missed out on a surprisingly detailed online campaign. Fortunately, you still have a chance to get in on the fun by winning a special theatrical poster for the film. Get the details after the break.

The found footage horror film set on the moon is probably best known for its changing dates more than any of its campaign elements or even poor reviews. Originally scheduled to be released on March 4th, 2011, it got pushed back to April 22nd before being moved all the back to January of 2012. The studio finally settled on September 2nd, 2011 for the release date.

So, what does that have to do with this contest? Well, while working a side job at a local movie theater, I happened to get ahold of a 27″ x 40″ one sheet that has the April date. If you want it, all you have to do is email me with your mailing address at dankoelsch@movieviral.com and leave a comment below with your review of the film. If you haven’t seen Apollo 18 yet, just leave a comment saying why. Open to residents of the US and Canada. Contest ends Sunday, September 22nd at 11:59PM PDT. Good luck! 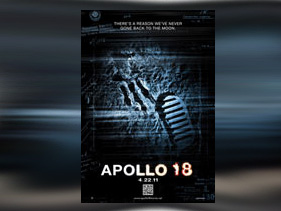