The Nielsen television ratings have long been the gold standard for television networks and advertisers to determine how well their shows are reaching audiences. With the rise of social communication and engagement online, the metric’s value has been somewhat skewed for not painting the entire picture about the reach of a show. After all, in today’s culture, is the number of people who watch a given show on TV indicative of its true reach? Realizing this, Nielsen has taken the seminal step in releasing weekly ratings for television shows based off the buzz they generate on Twitter. Hit the jump to learn more about the Nielsen Twitter TV Ratings.

To be sure, Twitter activity has been measured for a number of different events in the past, be it the Super Bowl, political debates, and yes, even television shows. But the only metrics gleaned from such tracking has been the total number of tweets about a given subject and where the tweets originated from.

Launching in conjunction with the start of the new season of television, the Nielsen Twitter TV Ratings stands as a game changer for what it adds to the analytics. In what should have marketers salivating, the company is not only measuring the volume and authorship of tweets, but also the size of the audience that receives the tweets in their feed, according to their press release:

Initial analysis of Nielsen Twitter TV Ratings reveals that the Twitter TV audience for an episode is, on average, 50 times larger than the authors who are generating Tweets. For example, if 2,000 people are tweeting about a program, 100,000 people are seeing those Tweets.

Until now, only the amount of Tweets and respective Twitter authors has been measurable. Without a measurement of the audience of people who view those Tweets, TV networks, advertisers and agencies were left wondering about the true reach and influence of TV-related activity on Twitter. Nielsen Twitter TV Ratings complete the picture by measuring both Twitter TV-specific activity (Authors, Tweets) and reach (Unique Audience, Impressions).

You can view the Nielsen Twitter TV Ratings for the week of Oct. 6 below. Many of network television’s heaviest hitters are on there, but the list is not a direct correlation to the company’s viewership ratings. For reference, Scandal, the most buzzed about show on Twitter last week, was the 10th most watched show according to Nielsen’s traditional viewing metrics: 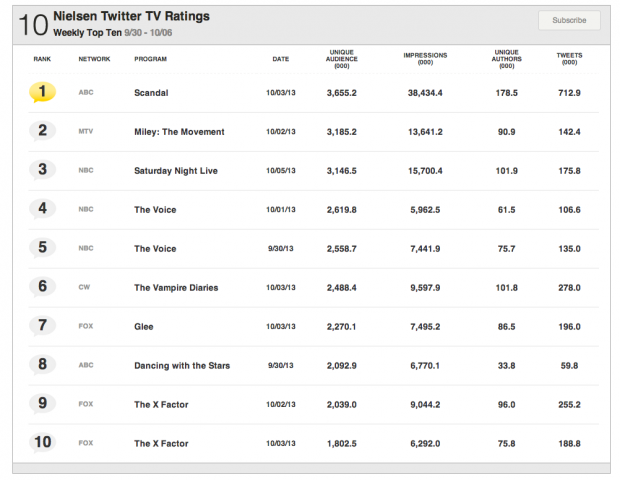 A television show’s viewership ratings have historically been one of, if not the most important, factors in determining its cancellation or renewal, even trumping the property’s devoted fans (think of shows like Firefly). It will be interesting going forward to see if and how the Twitter TV Ratings changes the standing of a show that may otherwise be subject to cancellation for lackluster viewership ratings.

Thanks to Engadget for the heads-up about this news. If you are interested in following Nielsen’s weekly Twitter TV Ratings, check out their SocialGuide platform.