Every kid remembers the books in the library with those tantalizing titles, “Choose Your Own Adventure”. The thrill of not only reading a book, but actually having control over where the story went was an amazing concept to any child. But the truth of the matter was that those books were mostly smoke and mirrors. We never really had control, we were just able to nudge it in a slightly different direction for a slightly different outcome, but they were still fun diversions.

Well, here comes the MovieMaze app for your phone! Taking that same concept and applying it to a film format isn’t exactly new (most early generation FMV games for the PC were nothing more than choose your own path movies done in game form). But now that experience is available on your phone and the results are startling similar. Learn more about MovieMaze after the break.

As of right now, this FREE app, which you can download on either the Android or iOS platforms, comes with one “full length” movie that also comes with the obligatory three possible endings depending on your choices made while playing. The film that comes included with the app is titled, The Mechanic and features a rather heavily stereotyped protagonist named Indeep Sheet (no, I didn’t make that up) who must return an automobile to a lovely lady’s mansion…and that’s it. It is very reminiscent of this relic from the 90’s that actually made it into theaters, both in functionality and quality. 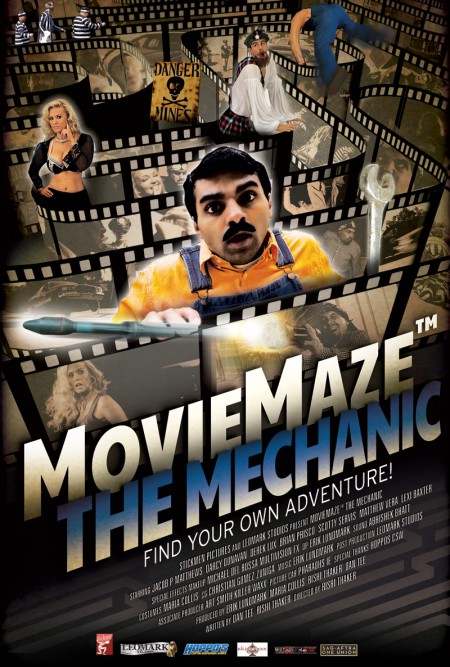 First thing you need to know when downloading this app, The Mechanic is not a very good movie, nor is it actually a movie (if you pick all the right choices, it could take as little as 5 minutes to get through). But that is where the replay value comes in with the multiple endings and indeed, there are a multitude of different situations that can arise depending on YOUR choices. The problem however lies in the fact that the movie itself isn’t very good, so no matter how many times you go through it, it never gets any better.

Thankfully though this is only the first of many more movies that are promised to be released sometime in the near future. Hopefully they will be better quality because the app itself is very functional and does exactly what it says it does. Selecting your options mid-movie is handled well and the presentation overall is pleasing. It may seem like poor form to criticize a product that is essentially free, but if the makers of this app wants us to use it, they better give us something worth going through at least once, let alone the multiple times they are promoting.

Once again, the app is free so go ahead and download it yourself from one of those two platforms and give it a run through to see for yourself. If nothing else, it is at the very least an interesting and functional app that will give you 5 minutes (or more if you like the movie included) of entertainment. Hopefully their future content will be worth the price of admission otherwise this app will die a quick death.

Google Chrome Experiment Puts “The Hobbit: The Desolation of Smaug” On The Map

From Film To Real Life Facts, This Flipboard Magazine For “The Secret Life Of Walter Mitty” Has You Covered

Google Chrome Experiment Puts “The Hobbit: The Desolation of Smaug” On The Map

From Film To Real Life Facts, This Flipboard Magazine For “The Secret Life Of Walter Mitty” Has You Covered