Trailers Weekly is a feature in which we bring you the most popular and talked about trailers of the week. Sharing trailers is a classic viral practice, and trailers are still the most mainstream way for people to learn about movies. We’ve got trailers from Wolf Of Wall Street, Labor Day, The Lego Movie, The Quiet Ones, and Only Lovers Left Alive. Hit the jump to see them all.

Wolf Of Wall Street
There were reports that director Martin Scorsese might not be able to make the Wolf Of Wall Street‘s original release date due to the fact hat the original cut was nearly three hours long. The rumored date was for a 2014 release, putting it out of Oscar contention. Now that Paramount and Scorsese have both settled for a Christmas release, the film still has a chance to win some awards. Based on the real life story of John Belford (Leonardo DiCaprio) the Wolf Of Wall Street is a look at the life of a young stockbroker who uses illegal practices to make large amounts of money. The film also stars Jonah Hill, Matthew McConaughey, Margot Robbie, Jon Favreau, Kyle Chandler, Shea Whigham, and Jean Dujardin.


Labor Day
Jason Reitman‘s Labor Day is a dark departure from the down to earth whimsy comedy that we would normally see from the director. In the film Kate Winslet and Gattlin Griffith play a mother and son family who pick up a man (Josh Brolin) in need of help. Little to they know this man is a fugitive who will use their house to hide out from the cops throughout the Labor Day weekend. Going further in will only spoil it. The film also stars Tobey Maguire, Clark Gregg, James Van Der Beek and Brooke Smith. Labor Day opens in theaters on Christmas Day but expands nationwide on January 30.


The Lego Movie
Lego movies have been done before, but nothing like what Phil Lord and Chris Miller has done. In addition to the lego action, there is plenty of humor, action, adventure, and of course Batman (Will Arnett) and Abraham Lincoln (Will Forte). And they aren’t even the lead characters. Chris Pratt voices Emmet, a mild-mannered ordinary Lego Minifigure who is mistaken for the one who can fulfill the prophecy. Along with Batman, Emmet will be joined by Lucy (Elizabeth Banks) and a wizard (Morgan Freeman), they will have to stop President Business from taking over the Lego world. Liam Neeson, Nick Offerman, and Alison Brie also star. The film opens in theaters on February 7.


The Quiet Ones
The first full trailer of Hammer’s new film The Quiet Ones starring Jared Harris and Sam Claflin. Directed by John Pogue, inspired by true events, The Quiet Ones tells the story of an unorthodox professor who uses controversial methods and leads his best students off the grid to take part in a dangerous experiment: to create a poltergeist. Based on the theory that paranormal activity is caused by human negative energy, the rogue scientists perform a series of tests on a young patient, pushing her to the edge of sanity. As frightening occurrences begin to take place with shocking and gruesome consequences, the group quickly realizes they have triggered a force more terrifying than they ever could have imagined. 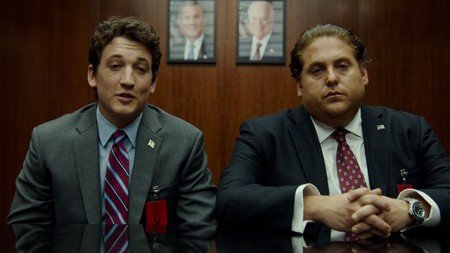