In a trilogy, there is a beginning, a middle, and an end. The latter is never the easiest to adapt because it often leaves viewers unsatisfied, forced to having to sit through something they know is incomplete. The first Hunger Games was the epitome of what teenagers would want from an adaption of a YA novel. It had action, romance, drama, sprinkles of humor and very appealing stars to look at So in essence, The Hunger Games: Catching Fire would need to raise to bar or at least try to stay in the same league as its predecessor.

The problem is that Catching Fire shifts its gears into neutral. It’s a problem that cannot be avoided because it is the middle part of a trilogy. So really no one is at fault, it’s just something that comes with the territory. Still the film is satisfactory, it’s just not as entirely exciting as the first. Despite those flaws, The Hunger Games: Catching Fire should have no problem pleasing its global fanbase. Hit the jump for the full review.

The film starts off a year after the events of the first film with Katniss Everdeen (Jennifer Lawrence) still unable to come to grips with the horrors of her first Hunger Games. She still has to play an act that she put on with Peeta Mellark (Josh Hutcherson) where they saved both their lives by nearly sacrificing their own lives to show that gamemaker Seneca Crane, President Snow (Donald Sutherland), or the Panem government cannot just toy with people’s lives the way they do.

This act stirred up the nation of Panem, and caused various uprisings throughout the country. As a result President Snow is forced to use Katniss’ act of defiance as a way to quell the uprisings. Because if she doesn’t comply, everyone Katniss knows, including Gale (Liam Hemsworth) is at risk of being killed.

But to truly put an end to the image of hope that Katniss has created, newly hired game maker Plutarch Heavensbee (Philip Seymour Hoffman) is hired to manipulate Katniss into killing her comrades in the next Hunger Games, which also happens to be the Third Quarter Quell. In a Quarter Quell, previous winners from each district are pulled from a pool and required to participate in the games. Think of it as a hall of fame game. Doesn’t matter how old you are or when you won, once you are chosen, you are forced to fight.

Now with the action and political allegory lingering in the background, one would think that it would make for a very exciting film, especially since the waves of revolution is on Katniss’ shoulders. But a lot of the times Katniss seems too oblivious to accept the responsibility of her actions. Now that is asking a lot from a character who is very stubborn and in a situation that is completely out of her control. So what looks liking whining and irresponsibility is actually revealing a young vulnerable girl who didn’t ask for any of this to happen to her.

And that’s what Lawrence sells very well. Putting aside the many Acolytes she is just beginning to amass, Katniss Everdeen was a role that Lawrence was born to play. She is the quiet but tough and stubborn character that both teenager genders would like to aspire to become. But she also has the capacity to show compassion, concern, morality, and vulnerability at the most critical moments. Again, very human qualities everyone would like to have. She can also be humorous, and surprisingly can be surprised by the act of a sudden disrobement by a central female character. It is because of these qualities that touches us as people as allows us to relate more to these literary characters than we could a wizard or a vampire. 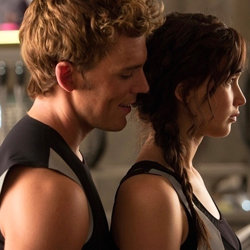 Without trying to make this a direct comparison to the book, the film really doesn’t waste any time acquainting you with the new characters. Finnick Odnair (Sam Claflin) is the more atheletic and charming tribute of the group who is paired up with a frail but very wise Mags (Lynn Cohen). The two have a history because it was Mags who helped saved Finnick’s lover from being a part of the games. There’s Johanna Mason (Jena Malone) who puts on a the tough as nails bad ass act as a defense mechanism. Then there are Beetee (Jeffery Wright) and Wiress (Amanda Plummer) the brains of the tributes of the Third Quarter Quell. Each of these characters display their skills and knowledge of how they won the previous games.

The problem of the film lies within the games themselves though. The first film was a battle royale, participates were actually shooting, slashing, and fighting to kill. In the Catching Fire, tributes are thrown onto an island whose elemental properties can be controlled at will. As innovative as the setting is, what it amounts to is just one giant natural calamity happening after the other. It does have its excitement, but once it passes, you are left knowing that another one is going to happen. It just depends on how big it is and how the characters deal with the situation. So instead of another battle royale, we are left with man vs. nature. Thankfully, all of those sequences are done on a steady cam, so the scenes aren’t jarring enough to induce headaches. But they are exciting to watch, watching a flock of bird attack Katniss and Finnick on IMAX was perhaps one of the best sequences of the calamities that was unleashed on our characters. Although the ratio deficiency and obscurities are present.

So much of the first film was spent on the antagonists willing to kill while Katniss and Peeta are on the opposite end of that spectrum worrying about how they will survive and the morality of the games themselves. In Catching Fire, the first third is spent on how the country of Panem was moved by Katniss’ act of defiance and how it has consequences. Followed by the the training and parading montages, and finally the games themselves. But it is that final third act that really doesn’t do anything but mosey around until the plot twist is revealed. And do much of those uprisings against the authority figures that we saw in the last act of The Hunger Games and the first act of Catching Fire doesnt take a back seat, in fact it’s just put in the trunk and practically forgotten.

Hutcherson does even less than he did in the first film, and Hemsworth is practically just eye candy. The only male lead who would amount to anything would be Claflin. Again, you can only do so much in the time you are given, but Finnick had this way with words and a way he would carry himself that would immediately force you to take your eyes of Hutcherson and put your eyes on him. Despite some of the other characters imposing or unimposing looks, I didn’t care so much for characters when their faces appeared in the sky – that means they are dead if you aren’t already caught up by now.

Malone was far more interesting that Hutcherson and Hemsworth put together. And it isn’t even about the character’s personality or swagger, but it’s just the energy that Malone put into Mason that got me interested. It’s really not that she is a bad ass by trade or default, but just that she needs to be a bad ass when the moment is right. But there are times when she can be free spirited and fun, which also gives her character more likability. Peeta and Gale just doesn’t show any interest in developing as characters, and look like shells of themselves in the first film. Interestingly enough its Haymitch (Woody Harrelson) and Effie (Elizabeth Banks) that have the character development that would resonate. While Maymitch’s development doesn’t come off as a surprise, Effie humorously sees what is really is going on and desperately seeks the group’s acceptance. Little does she know that it’s really unwarranted and the group as already accepted her as part of this crazed and highly dysfunction second family.

Again, that is not to put all of the fault on Simon Beaufoy (127 Hours) or Michael Ardnt (Toy Story 3). Adapting the second part of a trilogy isn’t an easy task. Francis Lawrence, replacing Gary Ross as director, did a pretty job with what he was given. But it honestly feels like the film is just rushing to get to get to the end and get ready to start the first half of the third and final act. It makes Catching Fire look like its just playing by the numbers instead of surprising us or have us on the edge of our seats. But maybe that was the idea, because the consensus is that the third book is the weakest of the three, so maybe since Lawrence is directing the final two, it was his intention to make the two halves of the third adaption the strongest of the three, and make the second one less edgy and more of film that builds up to the climax.

Still, that doesn’t mean you should avoid Catching Fire entirely. It does have its entertainment value. With this being a Quarter Quell, the new players bring a slight sense of variety that wasn’t seen in the first film. But even with all those experienced winners being thrown into the mother of all battle royales, Catching Fire just feels like it’s been tone down a bit and made to be more of a set up to the final act of the adaptation of the very popular YA novels.