The first trailer for The Amazing Spider-Man 2 has just been released, and already the viral site is making connections to it. While we don’t know the extent of BJ Novak‘s role in the sequel, rumors are swirling that it could be anyone from Donald Menken, Norman Osborn’s assistant, to Dr. Otto Octavious, better known as Dr. Octopus.

In the latest article to be published on the Tumblr site, the Daily Bugle goes behind the scenes over at OsCorp to get the latest info on the company’s latest advancements in technology.

Here are selected portions of the article.

Behind the ridiculously fortified superdoors of OsCorp Industries headquarters the future waits patiently for the rest of us to arrive. Only a privileged few reside there — guardians of the secrets that only time (and intrepid journalists!) will reveal.

Under pressure to quiet growing Wall Street rumors of plans gone awry, OsCorp spokesman Donald Menken gave me a glimpse into that future.

I was only given limited access to this room, and legally I can’t discuss what I saw in detail. I can barely describe what I saw now. Had I stepped just one foot deeper, it would have been too overwhelming for me to handle.

It’s like what my childhood closet would have looked like if all toys were free and unlimited — but OsCorp’s toys can save the world…or obliterate it.

So, if the future is already in the warehouse, how do they keep advancing? When money is no object, it means the best facilities filled with the brightest minds in science.

The scientific rumor mill (there is such a thing — I checked) has floated every leading name as a possible contributor. But none is more intriguing than world-renowned nuclear researcher Otto Octavius.

When asked about that rumor, Mr. Menken replied, “I can’t confirm or deny any rumors you read on the web. We talk to a number of different scientists every day about our special projects.”

Now remember in Sam Raimi’s Spider-Man films, OsCorp pitching tech-flight gliders to the military. There could be a similar scenario that follows, but that remains to be seen. Also Octavius’ name being mention in the article, and his four extra arms appearing in the film indicate that he will most likely appear in the sequel, possible being a member of the Sinister Six.

Here is a better look at those arms: 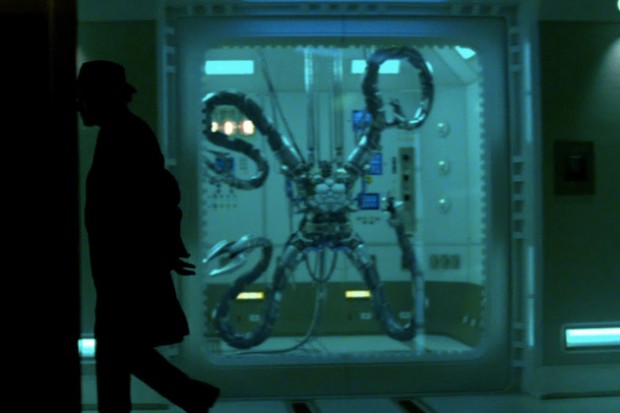 So what do you think? Be sure to check out our coverage on the viral campaign for The Amazing Spider-Man 2.