The Sick Viral Marketing Of The Film, “Kill The Rapist?”

This is definitely not the most holiday-friendly story, but iRock Films India has created a controversial marketing campaign around their new film, Kill the Rapist?. After the break, find out more info about this horrible film and what makes their marketing of it so completely wrong.

Sadly, Kill the Rapist? seems to be capitalizing on a real event that happened about a year ago in New Delhi, India, when a college student was gang raped by six men on a bus and later died of her injuries. The event sparked international protest over the protection of women’s rights and safety in Indian society. A short time after this happened, the iRock film production company announced the movie on their production slate.

The name of the film ties into the viral marketing campaign, because it’s asking people to vote whether the rapist should be killed or not, and they’ll change the ending accordingly. Here’s the trailer that asks that very question:

And here’s the teaser poster for the film which also mentions the ability for the audience to decide whether the rapist dies or not at the hands of his victim. It asks you to watch the trailer and then give a missed call to one of the numbers based on whether you say “Yes” or “No” to the question. 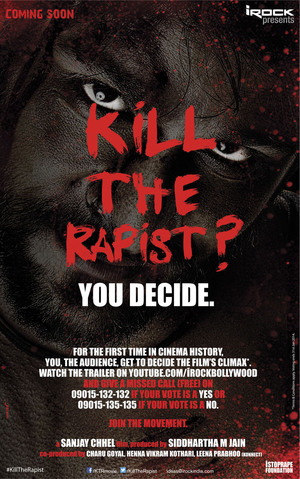 It’s bad enough that such a film is being made to exploit the horrendous event that ended a young girl’s life, but it’s even more deplorable that they make the act of deciding if the rapist will die or not into their own personal “movement” against such acts. It’s not a movement. It’s clearly just a marketing maneuver to bring more eyeballs to their film. This is one of the most despicable marketing campaigns, I’ve ever seen.

What are your thoughts on this marketing campaign? Do you agree with their controversial marketing methods? Tell us in the comment section below.