The 2013 awards season may not begin in earnest until Sunday night’s Golden Globes, but the buzz surrounding this year’s nominated films and actors has been building for the last few weeks. Presenting a new way to convey the interest these contenders are generating online, Variety and BuzzFeed have joined forces to create the BuzzFeed MovieTracker, a measurement tool that tracks the traffic and viral impact this year’s Golden Globes nominees generate from over 200 websites. Hit the jump to see the most buzzed-about nominated films.

The BuzzFeed MovieTracker calculates two types of measurements in its analysis. The first is total aggregate traffic, which is the total amount of web traffic a given Golden Globes nominee received based on articles published about the film within the BuzzFeed Partner Network of websites. The second measurement, which Variety refers to as “viral lift,” tallies the ratio of traffic from a shared link on a social network to organic traffic from that article’s website. This is a step beyond traditional aggregate endeavors, which have simply measured tweets or shares about a subject on Twitter or Facebook:

The BuzzFeed Partner Network differs from other social listening companies because it measures traffic generated by press coverage of a topic on 200 of the largest and most popular sites on the web. Instead of using a simple tally of Facebook shares and tweets, BuzzFeed’s proprietary “Viral Lift” measurement accounts for the social traffic to a story i.e. traffic generated from individuals clicking links to articles shared on Facebook, Twitter, etc. Social media users often post links on Twitter or Facebook without reading them so we consider measuring the actual traffic a story receives from social sources to be indicative of a high level of interest.

You can get an idea of how the MovieTracker works by looking at graphic below, which charts the “Best Picture, Comedy” category for the Golden Globes. As you can see, the line graphs measure the overall traffic generated from articles about each of the five nominees over the second half of December, with The Wolf of Wall Street enjoying the most overall traffic. Nebraska though received the highest “viral lift” with a metric of 5.1, meaning that articles about the film received over five times as much of its traffic from shareable sources like Facebook or Twitter, as opposed to organically within the site that published it. 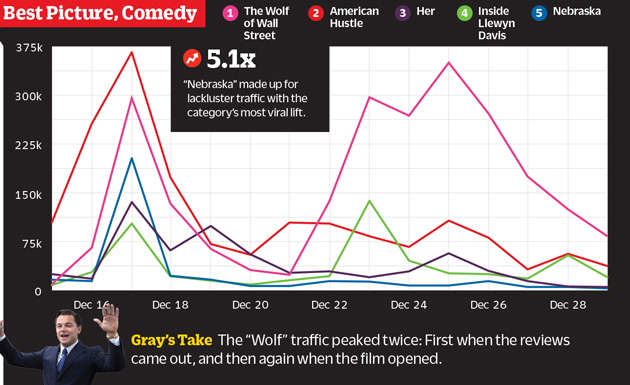 As Variety notes, the buzz tracker is not a measure of favorability for the nominees, but rather a measure of interest and engagement. If a film has high overall traffic numbers but a low viral lift, one could conclude that there is interest in the film, but not enough to share that interest with others. High traffic numbers and a high viral lift is optimal, since that means there are a large number of people visiting the page, with many doing so after clicking on links that had been shared by others on social networks.

It should also be noted that while aggregates offer concrete data to analyze, it is only one method of measuring a given subject. With that said, I applaud BuzzFeed and Variety in their efforts to expand the scope of viral analysis with their MovieTracker. If you think about it, these stats could help quantify the idea of awards season “momentum,” a term that entertainment pundits use to explain how a contending film might be the “favorite” heading into the Academy Awards. The word is often used after a film stacks up a number of other awards handed out prior to the Oscars, but really, the “momentum” that is felt is just as much a product of the growing public awareness, press coverage, and online engagement that comes from a film’s award success. The MovieTracker, which could measure changes in interest and engagement following the various awards handed out on the road to the Oscars, potentially presents a way of quantifying “momentum.”

I hope the BuzzFeed MovieTracker continues to analyze the online buzz of the major awards players throughout the next several weeks up until the Oscars, so we can see how the numbers correlate (or don’t) with the eventual winners.

You can view more of the BuzzFeed MovieTracker analytics graphs at Variety. And be sure to watch the Golden Globes January 12 on NBC.