Every year, the Super Bowl has millions of viewers, and not just sports fans. One of the big draws of this event is “watching it for the commercials.” This is when the very best commercials are aired on TV, and the one time people don’t want to fast forward to the rest of the show. We’ve seen companies advertise everything from beer to domain names to insurance, but below, we’re going to talk about the TV and movie-related commercials you can expect on February 2nd, 2014.

Hit the jump to find out what you’ll be seeing on Super Bowl Sunday
We’ve already mentioned an upcoming commercial with Muppets: Most Wanted, Terry Crews, and Toyota, but that’s just the tip of the iceberg. Screencrush writes that we can expect to see trailers from movies like The Amazing Spider-Man 2, and Transformers: Age of Extinction, all of which we are highly anticipating here at Movie Viral. It was rumored that Disney had purchased a spot for James Gunn‘s Guardians of the Galaxy, but the director confirmed that we won’t be seeing a trailer for the film that soon. Unfortunately, Warner Bros. will not be participating in the Super Bowl Commercials for this year, so we won’t be seeing anything for Godzilla, Jupiter Rising, or Edge of Tomorrow.


What’s further unfortunate is the fact that according to the LA Times, Neil Mulcahy, executive vice president of sales for Fox Sports Media Group said “Hollywood is probably not as well represented as they have been in the past.” In the estimated 65 spots available for advertisements, there are going to be less filled by movie trailers than we may have seen in previous years. That’s not to say that we won’t be able to see the likes of Robocop or The Expendables 3, but it will be a diminished amount of advertisements. It is also important to consider the fact that a Super Bowl advertisement that’s 30 seconds long is estimated to cost around $4 million, so some movie companies may be a little apprehensive about buying the airtime.

Despite the previous disappointments, we can end this post on a happy note with a nostalgic commercial planned by Dannon’s Oikos yogurt. We’ve seen in the past commercials referencing Ferris Bueller’s Day Off (which is incidentally being brought back to theaters briefly by AMC Theaters) and Seinfeld, and this commercial may just be as memorable as those. Starring John Stamos, Bob Saget, and Dave Coulier, this commercial will be a “reunion” of the 3 former stars of Full House, which ended 29 years ago, in 1995. A few preview videos have been released on the yogurt company’s YouTube channel. 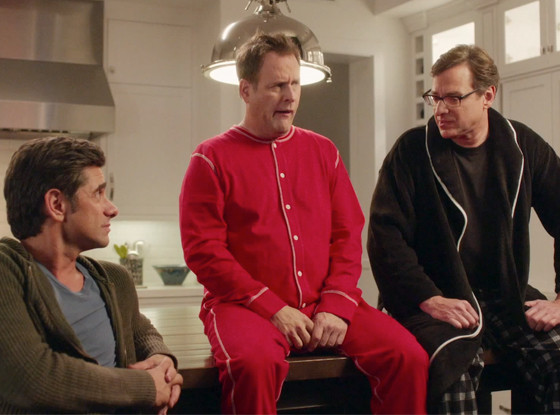 Whatever commercials are shown, it definitely looks to be an exciting game, interrupted by entertaining commercials. We hope to see footage of the upcoming 2014 movies. If not, we can always settle for a monkey in a tutu.