Any fan of Terry Gilliam will tell you that whenever a new film from the notoriously cursed director is released, it is time for celebration. Not only do most of his films find themselves a victim of studio meddling, some never even see the light of day (although there seems to be hope for his now decades long struggle to bring The Man Who Killed Don Quixote to the big screen). With his new film The Zero Theorem due out in UK theaters next week, it seems Gilliam himself is throwing a party to celebrate the release of his latest directorial effort as he is offering some lucky UK residents with a smartphone a chance to attend an exclusive screening before the film is released. Details on the contest and more after the break.

Terry Gilliam has tagged a single London bus with a banner for his new film The Zero Theorem. If you want to see the film at an exclusive advance screening, have a smartphone and just so happen to live in the UK, then you can enter the contest by following a few simple rules and have a chance to see the film earlier than its UK premiere on March 14th. Detailed instructions for the contest and a video message from Terry Gilliam himself can be found in the official press release below plus an image of the bus you will be hunting for following that.

UK Terry Gilliam fans can win 2 tickets to an exclusive screening of The Zero Theorem.

One London bus has been taken over by The Zero Theorem. 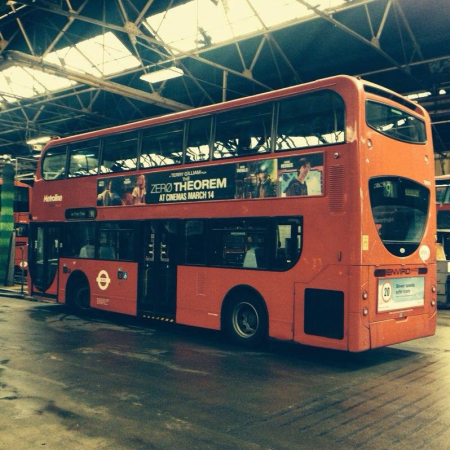 So what are you waiting for UK readers? Head out there and find that bus for your chance to win this rare treat! For more information on the film, check out its official website to keep up with any new announcements as they become available.

The Zero Theorem releases in UK cinemas on March 14th with a U.S. release to follow later at an undisclosed date and time.