“Catch The Throne” With The “Game Of Thrones” Hip-Hop Mixtape

“To hear the game is to know the game!”

In anticipation for the next season of Game of Thrones HBO has commissioned Launch Point records and a few of their artists to create a Mixtape inspired by the hit show.

HBO has enlisted artists such as Big Boi, Common, and Snow tha Product to create tracks based off themes and characters. The playlist  Catch the Throne (guess ‘Watch the Throne’ was taken) is now live and you can check out the tracks below.

It’s s a very interesting mix that any Game of Thrones fan will want to take listen to. Each song uses the mythology of the show and even samples lines by Tyrion and Daenarys, among other characters. Standout tracks are definitely “Ladder” by Common, “Fire” by Snow the Product and “Arya’s Prayer” by Dominik Omega–these really capture the essence of the character’s struggles on the show. The Arya and Daenerys tracks are perhaps the most emotional, relying more on the struggles of both characters–it doesn’t get more hip-hop than that. The rest are anthems that include familiar show tropes and music from the score. References to the Red Wedding abound–there is even a line that reflects everyone’s sentiments toward most of the family of lions:

“Fuck the Lannisters and everybody ride with them”

In a time were mixtapes have undergone a change to be shared on digital formats, this playlist promotes the show on a huge social scale with popular music sharing site SoundCloud on board. It’s a great avenue, now go work out to this.

Check the track list and stream the music on SoundCloud below:

Catch the Throne: The Mixtape 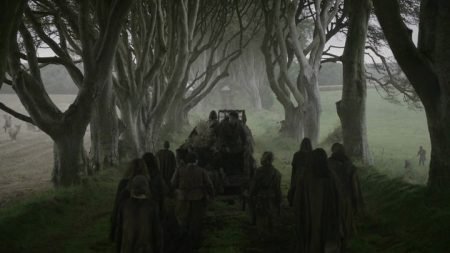