Paramount has released a brand new trailer for Michael Bay’s fourth Transformer film, Transformers: Age Of Extinction. The film takes place years after the events of Dark Of The Moon where Autobots and Decepticons are left to hide from the humans that are hunting them down. But a new threat arrives, which forces the Autobots out of hiding to protect the humans.

As we have seen in the last trailer, there will be some major Autobot vs Decepticon action, huge explosions, and Dinobots! But that was more of an announcement than anything else. This new trailer tells us more about the plot. And just when you thought you’d see an actual plot in a Michael Bay film, it gets into the explosion in your face style action. But isn’t that what the Transformers film franchise is all about?! Plus, the new trailer has more Dinobot action than you can handle. Check that out, and much more after the jump.

Here’s the newest trailer for Transformers: Age Of Extinction:

Check out the trailer in HD on Apple.

The film may not be as connected or structured as the films that Marvel Studios have been releasing, but that’s okay, because we get to see some awesome giant robot action again, and this time with the fan favorite Dinobots!

Paramount is also holding a little twitter contest for hardcore Transformer fans out thereout there. Fans can tweet using #TransformersPremiere for a chance to win a trip for two to the world premiere in Hong Kong to see the film and and watch Imagine Dragons perform live on June 19.

TRANSFORMERS: AGE OF EXTINCTION is the fourth film in director Michael Bay’s global blockbuster franchise. Mark Wahlberg, Stanley Tucci, Li Bingbing , Kelsey Grammer, Sophia Myles, T. J. Miller, Nicola Peltz, Jack Reynor and Titus Welliver star. The film begins after an epic battle that left a great city torn, but with the world saved. As humanity picks up the pieces, a shadowy group reveals itself in an attempt to control the direction of history… while an ancient, powerful new menace sets Earth in its crosshairs. With help from a new cast of humans, Optimus Prime (voiced by Peter Cullen) and the Autobots rise to meet their most fearsome challenge yet. In an incredible adventure, they are swept up in a war of good and evil, ultimately leading to a climactic battle across the world.

Don’t forget to check out a new poster for the film below.

Transformers: Age Of Extinction opens in theaters and in 3D on June 27. 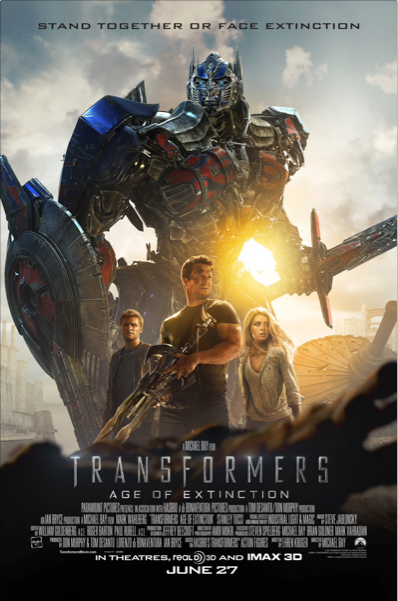