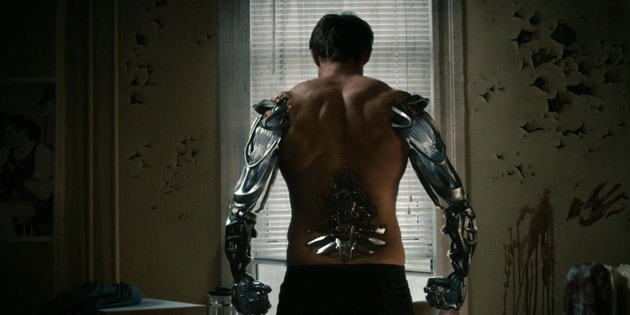 Anti-drug use campaigns usually show some sort of graphic depiction of the consequences of illegal drug use, which ranges from health problems to jail time. We’ve all seen these kinds of ads before, but what if one was tailored for a viral marketing campaign.

The Don’t Do Mech viral marketing campaign was recently launched to help promote Patrick Kalyn’s sci-fi short film Mech: Human Trials. The Wrap reports that the pitch was recently optioned to become a full-length feature over at at ScreenGems. Black List writer Mike Le and IAM Entertainment penned the script. Hit the jump to see the exciting viral video short and PSA after the jump.

Don’t Do Mech – PSA from Patrick Kalyn on Vimeo.

Best known for his VFX work on Avatar and District 9, Kalyn wrote, directed and produced the short film “Mech” and handled all of the visual effects for the project.

The Don’t Do Mech viral marketing campaign comes complete with social media accounts, videos, and even a faux website that has a PSA urging people not to do mech. The website has a mission statement, drug info, and contact information like an office address, a hotline [(800) 437-MECH], and e-mail address.

While the short has yet to be produced into a full-length feature, Kalyn’s five minute short is available for everyone to see over at Vimeo.

Here is a brief synopsis of the film:

After a serious accident, a man is introduced to a designer street drug promising to restore his ravaged body. Desperate to mend himself, he becomes consumed by the drug – only to discover it is threatening his humanity.

We’ll be sure to keep you posted should there be any updates to Mech’s viral marketing campaign.