It’s hard to describe a film like The Signal. For one thing, it switches between so many genres you start to lose track of what kind of a film you are actually watching. What starts out as a sci-fi mystery thriller turns into some sorts of quasi-romance found footage conspiracy film. There are probably a few others, but those are some of the ones I actually do remember watching.

And while William Eubanks‘ sophomore film tries to do too many things at once, the film isn’t afraid of picking up where it leaves off, and keeps on turning the dial until it finds the right frequency. Hit the jump to read the full review of The Signal.

The Signal centers on three MIT students Nick (Brenton Thwaites), Jonah (Beau Knapp), and Haley (Olivia Cooke) who are investigating a communications link between themselves and Nomad, suspected hacker to hacked his way into the highly secure MIT servers. All three play into common character tropes, with Nick being the headstrong athletic leader who walks on crutches after an accident; Jonah being the eager nerdy sidekick who constantly adjusts his glasses; and Haley, Nick’s love interest. The three finally locate where Nomad is communicating from, and decide to investigate the remote shack in the southwestern desert. What they discover is that they may have walked into alien territory, and then everything goes black.

When the lights turn on, we only see Nick strapped to a hospital bed. Agitated and wondering where he is, Nick is questioned by Damon (Laurence Fishburne), the apparent man in charge of the facility, who wears a biohazard-protective suit. He tells Nick that he is unable to leave until he able to answer is questions about what he encountered at the shack.

The narrative of the first two acts are actually fine, with the film relying on the mystery of who Nomad is and the mystery of the facility itself to keep audiences intrigued. Even the film’s viral marketing was shrouded in its own veil of mystery by keeping viewers in the dark with viral sites and youtube videos of the facility and the found footage.

Unfortunately the film starts to unravel at the seams by adding one twist after the other and refusing to answer some of the questions it asked. With no resolution or conclusion, the film refuses to answer any of the questions it asked, and chooses to keep on asking more questions and keep audiences wondering if they are suppose to wait for the answer or answer these questions for themselves. That sort of narrative can and cannot work. Especially with a film like The Signal giving nods to The Matrix, District 9, and The Blair Witch Project. But the promising cast brightens the film, with everyone in it putting all their energy into their performances, especially Thwaites.

But it isn’t all that bad, and revealing some of the film’s redeeming qualities would be diving into spoiler territory. However, these redeeming qualities do not come from the narrative portion of the film, but from the excellent and breathtaking visual effects. And while that may be the one thing to take away from this film, it isn’t its saving grace. With so many threads leading no where, The Signal initially fools the audience into thinking that it has a purpose and answers to the questions you have been asking throughout the film.

However, I will give the film credit for keeping the audience engaged by setting up intriguing exposition. Right from the beginning we don’t know who or what Nomad is, and when the three discover the shack in the desert it goes from “search for the hacker” film to the supernatural whether it be ghosts, aliens, actual hackers. It is that aspect of the film that works so well, but again, there is so much questioning in the film that it forgets to answer them.

Regardless, The Signal is an incredibly ambitious film, one that keeps audiences in their sets with mystery and intrigue. And although the film constantly changes its frequencies, a strong young cast with a veteran actor, and sparkling visuals keep the film from completely falling apart. It’s the kind of film that will keep you guessing, and that’s what I like about it. 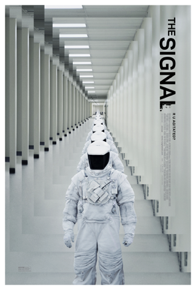