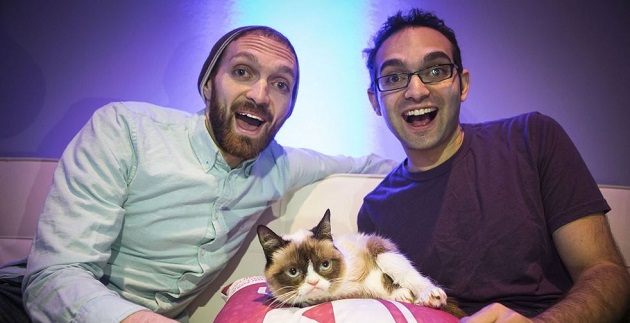 The Fine Brothers Raf and Benny, creators of the “React” videos and Film/TV shows “in 7 minutes”, sat down to talk to press about their latest endevour. They are teaming up with viral superstars Grumpy Cat and other YouTubers for The Friskies. Cat food company Friskies will celebrate online cat videos by running a contest were people can submit their cats to be the next online sensation. After the YouTuber panelists select finalists, The Fine brothers will show the final videos to kids in a special “Kids React” video and have them determine the winning cat.

At VidCon 2014, they shared a little more about their involvement with the contest, how they got their start and what they think the keys are to viral success. More after the jump.

What do you think is the secret to videos going viral? Why some are more popular than others?

Ben: I think that we’ve just come to an understanding of the cults. What is the zeitgeist? What is culturally relevant? Hitting things as they happen quickly. That’s obviously one of the secret sauces for something going very viral. Getting all of a sudden the ten million views on YouTube.

Raf: But then some stuff surprises us. We’ve done the very silly and fun random videos because the way that we are we wanna use that for good in a bigger way. We’ve done things like teens react to Cyber-bullying. We’ve done kids react to Gay Marriage. Those are episodes we have no clue how people are gonna respond to. We’re a little afraid because we don’t know if people are going to embrace it. And then some of those have been amazing worldwide being covered on national news around the world. Those are some of the most viewed that we’ve done.

What would you say is the “secret sauce” to this?

Raf: I think it’s just adapting to what’s happening online. Creating content around what people are talking about specific to the react shows. We’ve done a lot of things that have gone pretty viral as well.

Ben: We understand how to create for the web audience. Typically those start with knowing there is already an audience that wants the type of content that is under-served in some way by traditional media.

What would you say is the key to a working relationship between brothers?

Ben: We lucked out literally from childhood, from the beginning.

Raf: We’re best friends, I owe it to him.  He’s the older brother. He let me hang out with all of his friends. I think a lot of older brothers go “Oh, God no”. And for me it was just automatic. I could just go hang out with all them. So from the beginning, he was very easy to hang out with. From working together now, I think what’s worked is that we compliment each others skills. What he’s amazing at, I’m not as good at. What I’m good at he’s not that good at. We have the same sense of humor. We love all the same shows and movies.

Ben: it’s really weird in a way because we don’t have many different interests. We have identical interests in every facet of our lives.

What would you want your fans to take away from your videos?

Raf: When it comes to “react”, I think we want people to take away,to be yourself and have an opinion and discuss things. You should embrace what you really believe even if it’s against what your friends believe. Having  your own voice. Having your own thoughts and not just being like “who cares?”. Think about everything that you like. Think about everything other people are doing and actually challenge yourself to be self-reflective. To think more and have opinions about things. That’s kinda what the react environment is all about.

Ben: The other side of it is: what you love is what you should be doing. I think that anyone who is doing YouTube did this on their own. Technology is to a point where you can grab a camera and do it if that’s what you wanna do and there is no reason not to try cause the tools are there. Why not embrace it?

What is your role with the Friskies?

Ben: Part of our whole collaboration with Friskies is we’re gonna be doing kids react videos to the finalists of the entire award show. The idea that we have covered the keyboard cats and grumpy cat. The whole idea is that now we’re going to be finding the next Cat celebrity and see who they want to win. I know that the kids will love it. Any generation. Who doesn’t love Cat videos?

What advice do you have for aspiring creators of online video entertainment?

Raf: You need to do it because you love it. Don’t do it to become famous. Even for us it was a huge struggle. It took about seven years for us to be able to do this without needing to be working for other companies. So it took a very long time, its even harder now because there’s so many people. You need to be doing it without views. Second,the thing you might really wanna do might not be the thing to start with because it might not be the thing that’s gonna build an audience and brand for yourself to then want to watch the thing you’re most passionate for. If we had made some of the more long  form things that are not as viral without the other things around it, no one would have watched. So it’s: find what you are passionate about that’s gonna find an audience first.  Build that base that now likes you and wants to support other things that you make.

Ben: Look around YouTube or Online Video in general to understand what is working. The people that they love watching, that they wanna become. You have to understand what it is. Just learn from everything that you’re seeing. That’s the same thing when we grew up and wanted to be like Kevin Smith. We just studied his films religiously to understand how everything works. The camera, the writing, the pacing, the editing, everything. So I think that’s the same kinda thing on YouTube. That’s where you’re going. That’s what you wanna do. And we do say, “Don’t just go for YouTube. Go to college.” Also work in traditional media. Don’t ignore one for the other. You never know where you’re gonna end up–where your passion is going to be. Where your break is going to happen. We did not put all of our eggs in one basket. We did everything. To this day, we’re getting our heads in everything. Work in so many different types of shows, work with so many different types of companies.

We also got a chance to talk to Grumpy Cat about her position on the contest panel. The Friskies Lifetime award winner declined to comment but did agree to pose for pictures.