“The Hunger Games: Mockingjay Part 1” Viral Video: District 13 Has A Message For Panem

It was only a couple of weeks back when Lionsgate launched the revamped viral marketing campaign for The Hunger Games: Mockingjay Part 1. Tailored to fit the themes of the third book, the first wave of Mockingjay viral videos came in the form of President Snow (Donald Sutherland) addressing the nation as a unified force in a time where Katniss’ actions have started uprisings and revolutions in nearly all of the districts of Panem. The video also contained some minor spoilers, but it did set a precedent for not only the film, but for the marketing campaign itself.

Now a new video has been released, which shows President Snow once again addressing the nation, trying to unite them during trying times. But something strange occurs during his address, and it’s something the entire nation of Panem and fans of The Hunger Games novels needs to hear. Hit the jump to see the full video.

While this isn’t quite exactly the trailers fans would normally hope for, they are definitely great viral teasers that hint that their patience will be rewarded. We haven’t even seen Katniss (Jennifer Lawrence) in these videos, so if there is another one, you can bet she will appear in it.

The video was released on the film’s official Youtube page, and is available to watch on 4K HD. That is some premium quality if you have access to it, so I suggest you watch it in that format. You can also watch the video on the film’s viral site: TheCapitol.pn

Also check out the viral poster below. 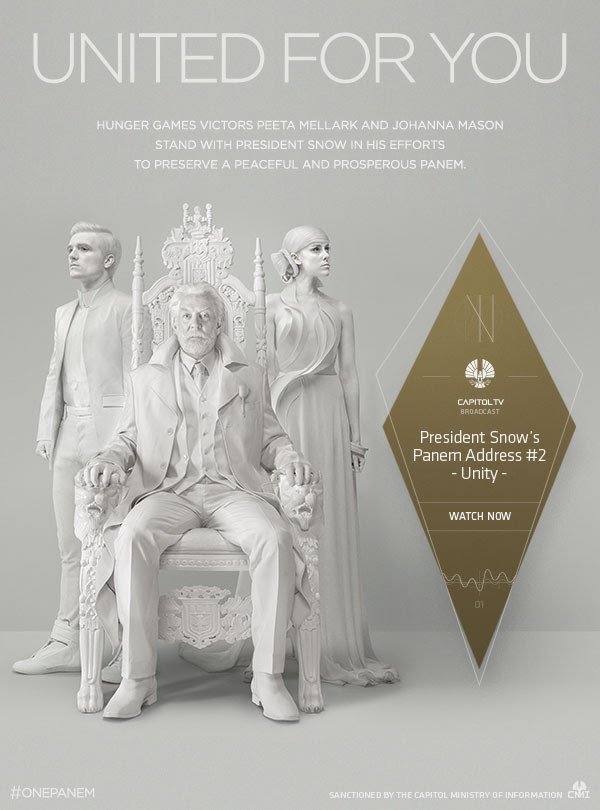