New Mobile Game for “Guardians of the Galaxy” Released

Developed by Disney Interactive, the game allows you to jump into the action with Star-Lord, Rocket, Groot, Gamora and Drax as they battle to recover the five pieces of the Universal Weapon before it falls into the hands of the villainous Ronan the Accuser.

Here’s the official trailer for the game.

In the game you can unlock, upgrade and control 25 characters from the Guardians of the Galaxy universe. You’re able to travel the galaxy and battle through more than 60 levels of real-time, gesture-based combat in Story Mode. You can progress through the story and defeat villains in Story Mode then you can switch up your GOTG team and recruit additional heroes and villains for survival in the Arena Mode. You can customize your team with the Guardians and their allies, recruit heroes, level up their skills and then outfit them for battle using unique item buffs and the mysterious Iso-8. You can unlock combo moves and unleash crushing attacks from powerful pairs like Rocket and Groot or Drax and Gamora. You can go head-t0-head with a roster of GOTG villains like Korath, Nebula and Ronan. 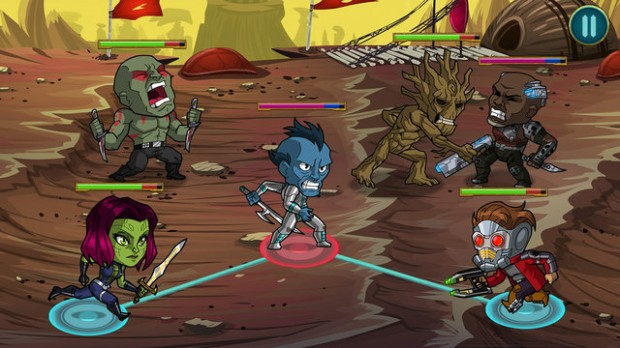 Guardians of the Galaxy: The Universal Weapon is available now on several different mobile platforms for $4.99. It’s also available on Windows PC for $7.99.

For more info about the movie, you can check out the Guardians of the Galaxy Facebook Page.

Guardians of the Galaxy hits theaters on August 1st, 2014.