If you just so happen to be over at the San Diego Comic-Con, you have seen a couple of flyers for the found footage time traveling thriller Project Almanac. Though the film has gone through various title changes, the premise of the film has stayed the same. Project Almanac follows a group of young teenagers who discover a document that would allow them to build a time machine. Using a video camera to record their discovery, they successfully build the time machine, only to find out that there are repercussions to altering the past, and they must find a way to reset everything to the way it once was.

While the film does dive into that time traveling fantasy, it manages to stay grounded by limited to how far back the device can take them. And now the Platinum Dunes company is ready to unveil the film to those over at SDCC. Hit the jump to check out the flyers that will lead you to the secret screening. 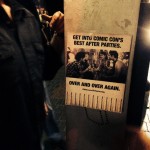 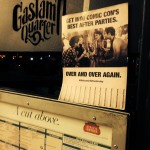 So far I’ve only seen these flyers at the Gaslamp District, but for all we know, they could be posted everywhere in the Comic-Con vicinity. But they all direct you to the screening of the film.

A group of teens embark on an adventure when they discover secret plans to build a time machine.