“Guardians Of The Galaxy” Review: Marvel Studios’ Latest Is A Heartfelt Musical Burst Of Energy

Marvel Studios really rolled the dice with James Gunn‘s Guardians of the Galaxy. And it paid off in spades! The first original film in Marvel Studios’ Phase 2 of the MCU, brilliant,spot-on funny, sharp, daring, and adventurous. Often times we say that every new Marvel film is better than the last, but Guardians of the Galaxy really lives up to that notion because it is a fresh property, and gives us a unique look at the comic book world.

It is just so much fun, and because it is a new title, it definitely eases the pressure of having to know what has been built before it, even though the film is part of a larger universe.

Peter Quill (Chris Pratt), aka Star Lord, is a young thief on the verge of stealing the galaxy’s most powerful item, an orb, only to learn that he isn’t the only one looking for it. Forced to team up with some of the galaxy’s most dangerous criminals: Gamora (Zoe Saldana) an assassin who works for Ronan The Accuser (Lee Pace), Drax The Destroyer (Dave Bautista) a galactic muscle bound warrior seeking revenge on Ronan for the death of his family, and two bounty hunters, Rocket (voice of Bradley Cooper) and Groot (voice of Vin Diesel). They must work together to keep the orb from getting into the hands of Ronan, who seeks to use his power for himself to destroy the Nova Corps and restore order under the Kree.

It’s actually quite funny to see some of the film’s bigger stars like Bradley Cooper and Vin Diesel take a back seat to do voice work, while Pratt, Saldana, and Bautista do a majority of the physical work. Not that there is anything wrong with that, but it goes back to the idea that Marvel is willing to take risks, even by casting unfamiliar names. But it isn’t star power, or lack thereof, that drew me to this film. It’s this whole notion, that each of these characters has something they lost, hence Star Lord calls everyone, even himself, losers. This sad and depressing note is what brings the unit together as one, almost as if they were a family. A highly dysfunctional family. Gamora is the sole survivor of her planet, which was killed off by Thanos; Drax lost his family; Rocket lost his dignity; and Quill lost a home.

The film really isn’t afraid to give these characters such tragic back stories. Heck the film even starts off that way with a scene that contains death. But I love how Gunn uses that to set the tone of the film, and create the necessary motivation for Star Lord to find his purpose in life. Most of that is carried out by making this space oprea feel like Indiana Jones meets Star Wars with a little Marvel magic added to the mix. You can see that Pratt is having so much fun with this. He just has the right amount of charisma, charm, and wit to pull off Star Lord. Through his struggles, we see him emerge as the hero and a true friend.

Saldana who plays as Gamora is a scarred individual who is not afraid to speak her mind, but deep down, she has a heart of gold. And it shows throughout the movie. While we may have seen Saldana play a badass space woman before, this is one of the few times we get to see if she can hold her own against a charmingly funny character like Peter Quill. She does succeed most of the film, but her badassery is still what draws us to like her.

Drax can also steal the show with his inability to understand metaphors or any form of sarcasm. It’s just so funny to see him look confused when he even see universal symbols for killing. Though we hear his tragic story, there just isn’t enough time to go around for him to be really fleshed out. Although I suspect we will get to learn more about him when the sequel hits.

Then you have Rocket and Groot, who shine in their own way. Cooper seemed like an odd choice at first to voice Rocket, and some of the scenes where he converses with the characters does seem a bit off putting considering he was never on set. Despite that, the quips and banter can be funny, especially when he is interacting with Groot, or when he gets angry does the energy start to really flow. Diesel, even though he says only three words, is probably the funniest thing of the entire film, and not because he can only say I; Am; Groot, and exclusively in that order. It is because his interactions with other characters comes off more naturally, especially when he is speaking to others.

Pace looks almost unfamiliar as Ronan, whose character comes off as a whiny child who wields a powerful hammer. But that isn’t a bad thing. Maybe it was written that way for a reason, especially when you realize what Ronan’s purpose for the orb is. But other than that, he a staple villain. That can be said for Nebula (Karen Gillian) as well. The film doesn’t really suffer because she is so one dimensional, but there isn’t really anything for me to get me to sympathize for her.

While the film may have some lackluster villains, the heroic supporting cast really is fun to watch. Especially the Ravengers, a group of space pirates who sell of trinkets and other space artifacts to the highest bidder. This group is led by Yondu (Michael Rooker), who is as cool as they come. Armed with his whistle activated arrow, and bad ass swagger, I can’t imagine anyone disliking him.

But where Gunn really gets it right is the film’s humor, making Guardians of the Galaxy Marvel’s first full fledged action comedy film. The film is out right funny, and even though it is a PG-13 film, it very much has Gunn’s signature comedy written all over it. Gunn doesn’t have a problem with inserting action sequences into the film, but honestly, the film felt more adventurous and comedic than it did action packed like most comic book films or Marvel’s previous films. And that works in their favor, because the goal is to create these Marvel films that exist in a larger universe, but also have them stand on their own.

Another aspect where the film shines is the music. Gunn utlizes each song to create the right moment for certain sequences. They may be based on 1970s hits, but it is a such a fresh feeling to hear songs like that being used for fight sequences. Did you ever think that you would ear The Five Starsteps’ “Ooo-ooh Child” being used to fight the baddies in the film. No, not once. And that’s the kind of fun surprises you can expect to see in the film. These songs oddly enough set the tone and the pace of the film, despite them being somewhat obscure to the younger audiences, but they will have the kind of hip energy to introduce them to the glory days of music.

There are just so many other things about that movie that I like, which will help overlook some of the minor flaws. The set pieces used in the film look and feel so very real. I’m quite impressed with the number of practical effects used in the film actually, which only enhanced the film’s epic realness. Visually stunning all around, especially in the VFX department. Rocket and Groot looked so real and effortless, while some of the Starships used will make you reminisce about Star Wars.

Guardians of the Galaxy though is different from all the other Marvel Studios’ films, is probably the best one of them all. There is just so much humor in this, and it has plenty of heart. It is easily my favorite Marvel Studio film of all time. And because it is the only film in the Phase 2 series that isn’t a sequel, you can bring fans in who have never watched any of the other Marvel films, and they would immediately pick up on the jokes, and chemistry between other characters. Again, it is easily the best Marvel film of them all, and missing it, whether you are or are not a fan or Marvel, would be an absolute crime. 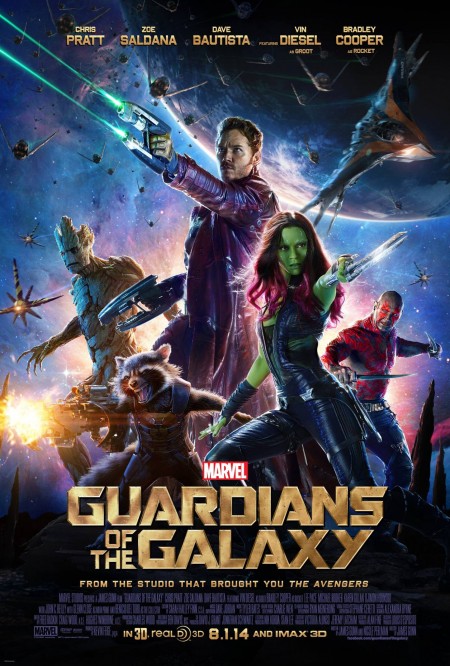