What do you get the guy who just finished directing your studio’s riskiest project to date and helped make it one of the year’s most critically acclaimed, highest grossing films? If you are Marvel Studios and shopping for Guardians of the Galaxy director James Gunn’s birthday, you scour the universe and track down one of the most powerful and valuable items in existence–an Infinity Stone! Read on to see why Gunn can now join The Collector in being able to say, “One down, five to go.”

Marvel’s gift to Gunn is certainly a memorable one: a replica of Guardians of the Galaxy’s primary MacGuffin, the Orb, complete with the Infinity Stone inside it. Nerdist, who we thank for the heads-up, believe the gem represents the power stone, though I don’t know if that has been confirmed officially. Gunn posted the picture of his gift to his Instagram account with the caption, “Pretty wonderful birthday gift from the folks at Marvel.” 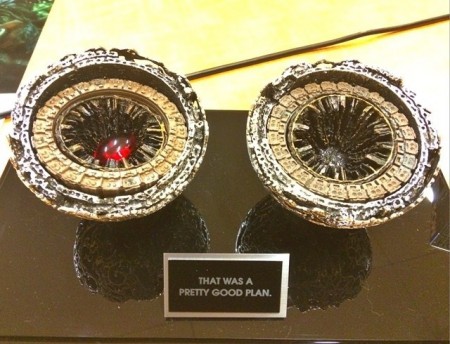 It’s a nice gesture to be sure, and it is fun to imagine if the studio has or will recognize its other directors with similar gifts related to the additional five gems (though I doubt Alan Taylor received much of anything for Thor: The Dark World). It certainly would be fitting if Joss Whedon is gifted a gold gauntlet by the time Avengers 3 rolls around.

What sort of MCU-related gift do you wish Marvel Studios would get you for your birthday? Let us know in the comments below.