A Disney animated Marvel film almost seemed to good to be true.  But when Disney acquired Marvel Comics back in 2009, a collaboration of the two forces was inevitable.  The two would announce Big Hero 6 as their first collaborative project.  But the film wouldn’t be a direct adaption of the comic book of the same name, instead the title would serve as an inspiration for the film, which would have the same characters but a new story and a new setting.  Directed by Don Hall (Winnie the Pooh) and Chris Williams (Bolt), Big Hero 6 features the voices of Maya Rudolph, James Cromwell, Damon Wayans Jr., T.J. Miller, Alan Tudyk, Jamie Chung, Genesis Rodriguez, Daniel Henney, with Ryan Potter as Hiro Hamada and Scott Adsit as Baymax.

We were invited to visit Walt Disney Animation Studios in Burbank, CA a few weeks back to learn about the film and watch about 30 minutes worth of footage, both finished and unfinished.  While we saw some of the latter, what we saw was very promising and had that magic Disney touch we all know and love. So out of this studio visit we have 100 things you may not know about the film.  This includes all sorts of facts like trips to Carnegie Mellon to research soft robotics,  new softwares developed to help enhance the visual effects of the film, how many times the story needed to be changed, how the robots in the film can have real world applications but also have that Disney magic touch.

But do you know how many animators have worked on the film?  How many Microbots can be seen in once scene?  What kind of object was the inspiration for Baymax’s face? How Walt Disney Animation Studios’ Head John Lassesseter helped during the writing process? How many storyboards is in one sequence, and how many of those boards are tossed if one sequence is taken out.  You can find out about all of this and more after the jump.

Basics
1 – While the film shares the same name with it’s Marvel Comic series inspiration, the story and the world it is set in is entirely different. Big Hero 6 tells the story of Hiro Hamada, a technology genius who specializes in robotics. Set in the near future of the hi-tech fictional city of San Fransokyo (a hybrid of San Fransisco and Tokyo) that blends eastern and western cultures. Here’s an early example of what they wanted you to see.

As you can see the city is full of bright neon lights and has a lot of moving ads, which would represent the Tokyo aspect of San Fransokyo. There are also lanterns, Japanese characters written on some of the buildings. The San Fransisco part of the film is represented by the hills, trolleys, and the Golden Gate-esque bridge in the distance.

2 – At it’s core, Big Hero 6 is a story about a young man and his robot, who helps him recover from a devastating loss and help him become whole again. Through the eyes of this young man we see this process is filled with tears, surprises, thrills, and lots of laughter.

3 – Big Hero 6 is Disney Animation Studios’ first full fledged superhero movie.  Pixar has The Incredibles, and Marvel has their library of films.  While the film shares the same title with a Marvel Comics’ series, the comic book is only the inspiration, the characters, plot, city, are entirely original creations.  It has that Disney stamp on it.

4- An average Disney film has up to 2 to 3 lead characters and 3 to 4 supporting characters.  Big Hero 6 has 15 main characters.  There is the team of 6 characters. 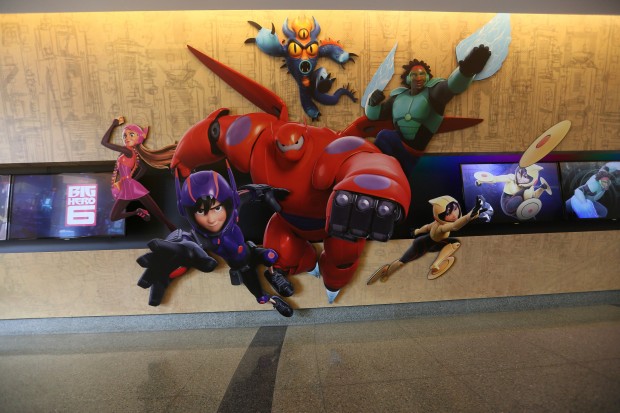 5 – The characters’ personalities had to reflect what their suits and powers would be.  So since Wasbi is a precision and control freak, the writers would give him plasma blades.

6 – There are up to 85 different animators working on this film.

7 – It takes about four to five years to fully develop the script for an animated film like Big Hero 6, because the story is constantly changing. But the storyboarding allows for a quick version of the film to be laid out, this way they can see if the story can work out, and then they could make any necessary changes to the film itself.

8 – 2/3 of those four or five years are actually spent on crafting the story.  Animated films at Disney resembles the TV writing process where it is very collaborative, and the story departement works together by throwing out ideas until it sticks.

9 – While Big Hero 6 does have the Marvel brand attached to it, Don Hall actually pitched the story about a genius kid and his healthcare robot.

10 – Some of most simple sounding questions are actually the biggest ones the storyboard team has to ask like: What happens in the beginning?  What happens in the middle? When is this going to end?  But they also ask what is this movie going to be about?  That question isn’t necessarily focused on plot, but they are trying to figure out what they want to say with the themes, characters, etc.  The more answers and ideas they come up with, the more storyboards they pin it to the board, then it really starts to take shape.

11 – Lasseter will come in once in a while, and provide some help since he is going into it with fresh eyes and hasn’t been locked in a room for months on end trying to figure the story out.

12 – The story trust, other directors from previous or upcoming Disney films, will help out in the storyboarding process.

13 – As a writer going from pitch to outline to script is a very exciting time, especially in the final stage of the script process where they finally get to dig in to who the characters are, how they work with each other, etc.

14 – Actors will be brought in for a table read, a sort of radioplay, where they will hear the script being played out for the first time.  This helps the writers, directors, story trust, and Lasseter to figure out what is working and what isn’t working.  According to the writers, this process reveals that they found out what isn’t working more than what is working, but that will give them the opportunity to go back to rewrite the script.  At this point, they are already a year into the film.  The collaborative efforts allows the writers and directors to discover how these characters will interact with each other on screen. 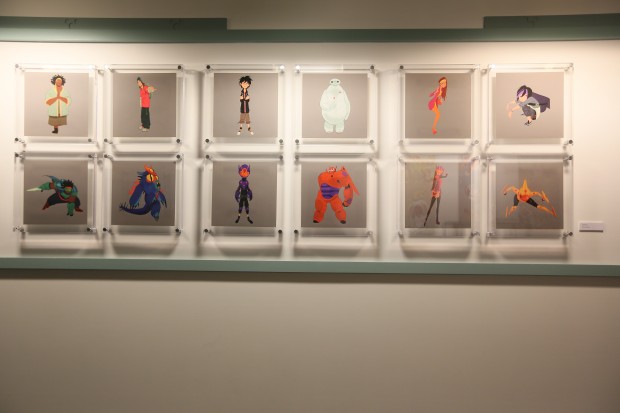 15 – The movie is divided into 20 different sequences where it is then handed out to different storyboard artists who must make sure that everything is still making sense.

16 – Once they have the movie, they start to do screenings, from inhouse studio screenings to early press screenings, these screenings are doing to gauge the audiences’ reaction to the film, and find out once more what is and what isn’t working.  There are about eight screenings in total before the film is actually released. The first screenings are always the worst ones of the bunch.

17 – A sequence can be up to 1,000 drawings.  If a 9 minute portion of the film doesn’t work as the writers would have hoped, up to 30,000 boards can end up in the garbage, and the team will have to work on a blank board again. Conceptual things will remain.

18 – Nothing is being animated until they figure out the story. This doesn’t mean the story has to be completed, it means they have to figure out what is working for them.

19 – For John Lasseter, story is king, and nothing is more important to get right in a film than story.

20 – Big Hero 6 was initially a struggle to begin with because of characters like Fred and his Kaiju supersuit, Microbots, and even the fictional San Fransokyo.  This is the kind of story that can easily turn from one that the audience can relate to, to one that the audience doesn’t relate to at all. The connection was the most important thing about this film.

21 – Big Hero 6 is actually following a new story trend at Disney, where the theme focuses on family and relationships.  While Frozen had a family tied by blood, Big Hero 6 will have a unconventional one where Hiro builds a new family with the friends he meets in the film.  All of whom have some sort of personal connection to his brother, Tadashi.

22 – Lasseter stresses to the writers that that you don’t know how a movie starts until it ends. So he wants the writers to work backwards, from the end to the beginning.

Continue reading to learn about the research, visual effects, and our hero Baymax of the Big Hero 6. 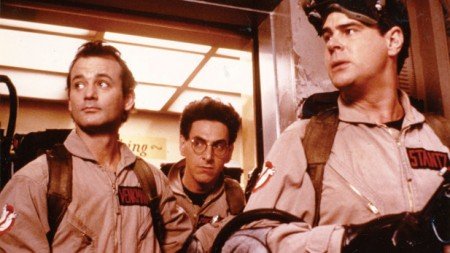