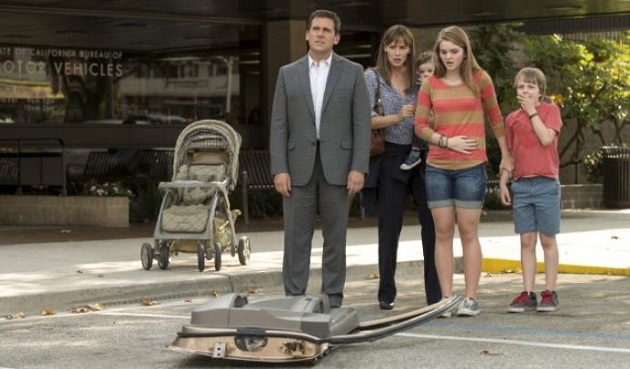 Turns out having bad days can be a lot like the one the Cooper family lived in  Disney’s latest live-action family picture. The ensemble of Alexander and the Terrible Horrible No Good Very Bad Day shared their tales of how they deal with rough patches in life.  Hit the jump for more on  how Jennifer Garner and Steve Carell get through challenging days of parenthood while on-screen kids Kerris Dorsey and Dylan Minnette describe how to have good days.

All family’s have terrible, horrible bad days including the Afflecks. Jennifer Garner compares her role in the film to her role as a real life mother.

Jennifer Garner:  This is basically a day in my house. Every day is a fresh start. Today we’re going to try this and if it goes horrible today we’re throwing that out and trying this. That’s part of what I like about being a mom in general.  It’s okay to have bad days. It’s okay to have the whole range of emotions. You should have it all. You should have rage and anger and sadness–so there’s room for joy and happiness as well.

Playing Garner and Carell’s teen daughter in ‘Alexander is Kerris Dorsey who thinks practical when it comes to rough times in life but also sees the importance of having a good support system.

Kerris Dorsey: Air conditioning!  Everyone having a good attitude at the end of the day is always good. When you’re going through stuff its fun to have company to help you through it. So sometimes its nice to have people who are having bad days alongside you because then you can relate to each other and realize the ridiculousness of the day and move along and sort of get through it.

Steve Carell thinks ‘Bad Days’ can also be dealt with by experiencing them independently for some perspective–whether you’re an adult or a kid. He shares his approach to giving his kids space because in the future you won’t always have someone there to help.


Steve Carell: Sometimes you might just be having quietly and privately bad day and you just want to work through it yourself. You don’t want to have your parents trying to make it better because ultimately we’re not going to be there to make it better. The toughest part for us is holding back from always trying to make days perfect–make it ideal. Life will give you twists and turns. That’s our challenge: is to not make every day the best day possible. It’s just not realistic.

Playing the eldest Cooper who optimistically looked forward to a #Blessed day before his little brother’s bad luck streak hit the clan is Dylan Minnette who is definitely having a series of good days since his band’s music made it into the film.

Dylan: (My band) The Narwhals, got a call that Miguel wanted us to have a song in the movie–they wanted us to write a song for the film. But I said I think we have a song that would fit the film well called, ‘Surf Surf Don’t Drown’. I think Disney and you should take a listen to it and they did and they loved it. They flew the guys down to Altanta cause I was there to record it and now it’s in the film during the montage. It’s really exciting.