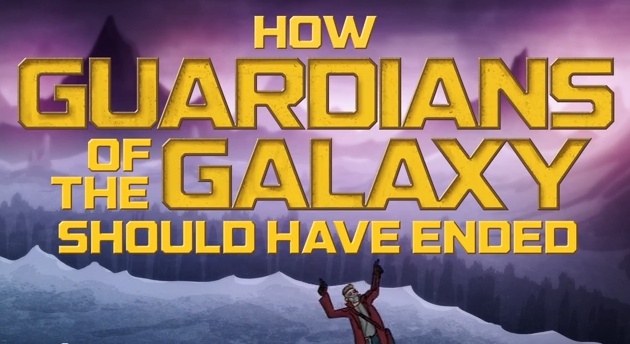 The How It Should Have Ended series has provided us with some great entertainment for films that could have ended according to them. Sure there are many films with numerous plot holes, but trying to point out the flaws with light-hearted comedy is a tricky task. Some directors are offended by these videos, others like James Gunn welcomes them with open arms.

So it seems that much more enjoyable to watch when he announced that he liked the HISHE video for Guardians of the Galaxy. In it we see a ton of references of the film, and the many ways to which it could have ended. There are also cameos from other characters from other videos who make an appearance. Hit the jump to check it out.

Yes, the film has plot holes. Yes the Kyln guards could have shot all at once at the same window thus killing the Guardians. Of course Rocket could have stopped The Collector’s slave from grabbing the stone. And then there’s the Sakaaran who would killed Yondu. Let’s not forget Ronan just ignoring Peter Quill’s hilarious attempt to distract him by releasing the Infinity Stone’s energy and destroying the planet using his hammer. All of that could have happened. But it didn’t, because if it had, there wouldn’t be anything for HISHE to make fun of.

But it is the “I am” riff off you should watch at the end that will have you laughing. Also, look out for even more interesting cameos in the Collector scene.

Guardians of the GalaxyHow It Should Have Ended