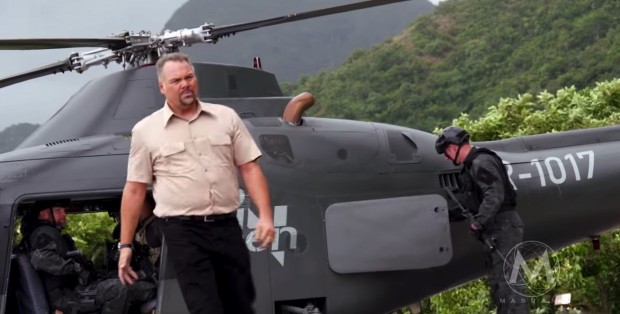 We’ve already seen some great viral content from Jurassic World. The film takes place some 20 odd years after the events of the first film, with Masnari, a new conglomerate, acquiring InGen and opening the park doors once more. Of course their are other nefarious things going on in the park like the creation of the IndoMinus Rex.

But in a newly released viral video from the Jurassic World site, we are learning more about the InGen and how the company has evolved into something new while still honoring its previous innovations. Hit the jump to check out the video.

As you can see the video introduces us to Vincent D’Onofrio’s character in the film, Vic Hoskins, head of InGen’s Private Security division. There are some hints of new footage in the film, some of which looks like b-roll, with a few scenes from the trailers.

Twenty-two years after the events of Jurassic Park, Isla Nublar, an islet located off Central America’s Pacific Coast, near Costa Rica, now features a fully functioning dinosaur theme park, Jurassic World, as originally envisioned by John Hammond. This new park is owned by the Masrani Global Corporation. Owen Grady (Chris Pratt), a member of the park’s on-site staff, conducts behavioral research on the Velociraptors. At the corporation’s request, the park’s geneticists create the Indominus Rex,a genetically modified hybrid dinosaur, to boost visitor attendance, but it soon breaks loose and runs wild throughout the park, forcing the staff to consider unique measures to stop it.