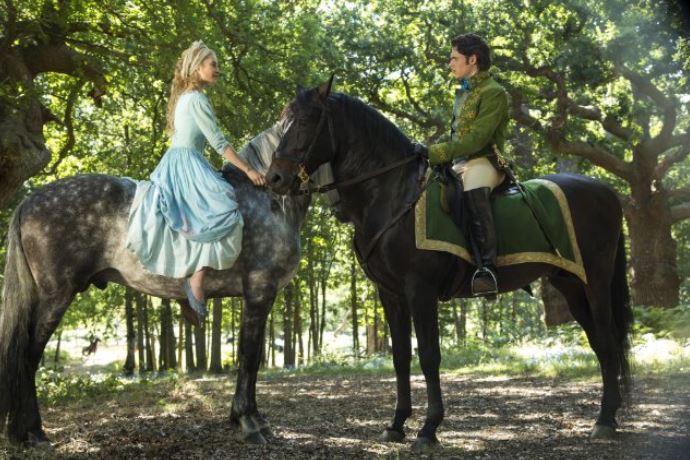 This weekend, Kenneth Branagh brings us his take on the beloved Disney Fairytale. We got to talk to him and some of the cast to learn more about what makes this timeless tale relevant for modern day audiences as well as how our present social standards affects some very big changes to the story. Lily James, Richard Madden, and Branagh gave us some fun insight into what to expect.

Q to Lily: Was it a childhood dream to be a princess?

Lily James: Well I always wanted to be a princess. I loved princesses. My grandma would make me like the Princess Jasmine outfit and I had like little plastic princess slippers and I really loved the princess growing up. I auditioned to be one of the sisters and then I got to read Ella and being her made me desperate to play her.

Q: How do you like the whole philosophy about kindness and courage. Do you feel like you kind of have those qualities?

Lily James: I hope so. I think we all do. I think we have to, to sort of get through life. I do. I think whats amazing about Ella is that she is the best version of herself at all times almost and that’s what’s remarkable about her. Kenneth directs with such heart and warmth and very kind of specific and right from my first audition how he spoke about Ella and how he wanted her to be. He always talked about where does her goodness come from. It can’t just be this abstract ‘she’s a princess therefore she is good and sweet and doe-eyed and floats around on clouds. Why is she this girl and does it cost her and how does she maintain this goodness?

Movie Viral: What is really cool is that her strengths are described as her superpowers by Branagh and the producers. For those who grew up with the same princesses as you did, like Jasmine and Belle,  how did you feel about having that as an inspiration to create Ella?  How did that inform in keeping her relatable to you and to anyone who is going to see this movie?

Lily James: I watched all the Disney Princesses and it’s amazing how they’ve changed and how they have become more modern right up until Frozen. I really wanted Ella to be-I felt that I wanted her to be a lot like Belle and Ariel. I’m such a geek with princesses. That desire for more in life to want to explore and day dream and I feel like that spirit of princesses–they’re great role models. They’re great inspirations for kids because they’re kind of outside of society in a way. They don’t settle, whereas I think Cinderella with this criticism of this girl just waiting for a prince to save her–we wanted to chop that out and not have that dominate in our film. I tried to take flavors from all of the princesses yet keep the overriding idea that Cinderella is this kind, good person that is able to be happy in a cruel environment because of it and it is a superpower.

Q. How was it to make the Kit a character that would be worthy of the love of Cinderella instead of just defaulting it to him being a prince.  Was it fun making him a character and make her right for him based on contemporary standards?

Richard Madden: He’s just a normal guy in a very strange situation. That was the challenge for me. Cinderella couldn’t be more wonderful, you’re with her the whole film. I had to create a guy that was worth of her affections. And that was difficult. We’re trying to get rid of that old fashioned view of things. I love the old animation,  its great but I think that concept of a woman with a terrible life who needs a man to come and rescue her doesn’t apply  and isn’t something we should be teaching kids. So this was difficult in that how do I make a character worthy of being around her and win her affections. How do I make someone who’s got a sense of humor? I wanted to make him aware of his own privilege and have compassion for everyone around him.  And that was really exciting for me. You don’t get to see him like that or know his name in the animation. Kenneth wanted to start from scratch with this and build someone who was a bit more fun and a bit more real.

Q: In revisiting the beloved Disney film what did you discover about what you really loved  about taking a new look at it and what did you come to learn you really liked about the Cinderella story that’s existed for all these centuries?

Kenneth Branagh: This is a fairytale like I expected it to be but these people sound like me. The Cinderella story via old editions…I found that it was very emotional, I found that I  was very affected by the lives and deaths and the basic of wanting to be on the side of somebody you hope does well. A good girl. I got chocked reading it a lot. So I weny back to the animated one and it just felt to me like it was a piece of genius but from another age and that the world had moved on in lots of ways that this story had to respond to. And that, that was very exciting  to the character of Cinderella herself. The things that they did brilliantly–the cats and mice–the singing would be something I would leave untouched and we would try to get into the hearts and minds of the characters in a different way that would try and reflect the 21st century and these great actors who brought subtlety and nuance to it.  We said everyday ‘how do we do this?’ ‘does the story make her appear entirely passive?’ Not neccesarily and you build the case for that by finding out who she is, seeing her in her early life, seeing her disfunctioning family, is love there? There silliness there? There’s passion there? Basically te reinvestment in her with kindness and courage being things that can be embodied by people who also have the sexy and fun and intelligent  It’s not making a case for everybody to turn into saints, Simply its good to be nice. it’s nice to be good and it take some balls. There I’ve said it now.

Q: it tricky coming up with a Prince Charming worthy of this Ella?

Kenneth Branagh: Well we did feel that. He had to be worthy, he had to be not just someone who’s a great love interest. We can’t think about it like that, its the ghstly truth of the other desicons in movie making so we got to think about it in a different way. It’s her picture, its the women’s picture and because of that when he does occupy the time it will be significant. We will really listen carefully so he will be intelligent, chivalrous and kind in way that could be expressed. This is fully felt, they are complimentary. Its about something deeper and simpler. I wanted it to be fun and light so be intelligent and deep in all those things.

Q: And was Lily on when you came aboard?

Kenneth Branagh: It was inevitably a search, it was the same to some extent when we did Thor and you realize that however beautiful a story or idea might be around either of those projects that it just wouldn’t work if you didn’t get the right person. Of course you could cast an actor but it wouldn’t work unless you cast the right actor. It ends up being that sort of alchemy who meets it. We were very lucky that she came into our lives with as you’ll have seen with this beauty and she’s fun and shes kind and shes nice and shes honest and direct hardworking, skillful and she was very patient throughout the long process of doing this.