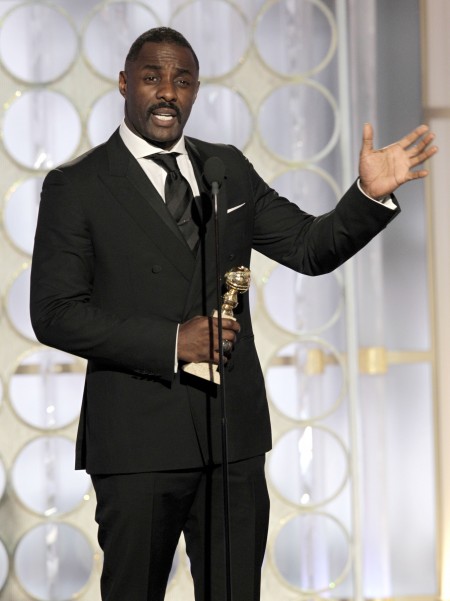 The man himself closed the matter recently. Idris Elba more or less officially said stop speculating on whether he has a shot at the role of James Bond. The fact that he did so gracefully, devoid of precious ego or self-aggrandisement and without chips on shoulders, simply showed why he seemed like such an obvious fit.

The man has charm, talent and presence. Physically, he commands the screen. Good at action, he’d take any villain in a fight. Looks comfortable in a suit. Can rough it in a nightclub or glam up with Hollywood royalty: pure class. Women love him. And yet, it’s a relief in a sense that the debate has finally died a death. It was getting tiresome.

Just in case it does ever crop up again (like Bond’s nemesis Blofeld, it keeps coming back): here is a list of reasons why Idris Elba won’t be James Bond.

He doesn’t need it!

Idris is already a ‘name’ actor. A star. Traditionally, the Bond part confirms star status that was simply awaiting the right outlet (Pierce Brosnan, Daniel Craig). Alternatively, it crowns a new discovery (Sean Connery) or consolidates some existing power (Roger Moore after his stints on The Saint and Persuaders; Timothy Dalton as our finest Shakespearean actor). The part is frequently rumoured to go to a ‘name’; but it is NEVER ultimately played by an already independent ‘star’.

Bond makes you a star. A star does not make Bond. Idris Elba is already a star. He’s known. A valued Box Office commodity in his own right, he simply does not need the Bond part to cement his powerful position. Every Director wants to work with him and every franchise has him on the radar. If Team 007 did want him, they’d have to get in line!

There is precedent for this, going right back to the start of the Bond series. Both Ian Fleming (Bond’s literary creator) and some of the film developers were actively interested in hiring David Niven, James Mason and Cary Grant for the part of the super-suave, super-spy. Each turned down the offer; reluctant to commit to a multi picture deal. Much like Elba, they were big box office draws and represented the best of British. And therefore, also like Elba, they did not require the role on their CV.

The Role is Spoken For

Daniel Craig IS James Bond. Admittedly, that statement has applied to every actor taking on the 007 title. Each man is replaceable. George Lazenby discovered that, to his cost. He left after just one turn in On Her Majesty’s Secret Service.  Despite being perhaps the most convincing on the physical / fight choreography side of all the Bonds, Lazenby’s legacy is undermined by the lack of lasting tenure.

Craig is a different case altogether. He retained an independent spirit, whilst ‘playing the game’ in the development, production and promotion of each of his Bond efforts. Impromptu script polishes on (the underrated) Quantum of Solace? No problem. Recruiting Sam Mendes to direct Skyfall and thereby scoring the first billion dollar Bond: priceless.

In effect, the current era of James Bond is its commercial and creative zenith. ‘Nobody does it better’ is an apt quote. Whilst the time will come where of course Craig can and must move on from the series, he is unlikely to face redundancy or replacement anytime soon.

It’s Never Who You Think it will be

Pierce Brosnan was the favourite for Bond in 1986 but Remington Steele contract shenanigans precluded his taking the role, which went to (admittedly the joint first choice anyway) Timothy Dalton. Brosnan got his second chance in 1995 with a triumphant GoldenEye. But all good things..so in 2005, his departure from the 007 world was confirmed, officially. We all know Daniel Craig won the part and owned it. But the initial favourite in public perception, whether by choice or by chance, was Clive Owen.

The man was on the rise. Roles in Sin City and Gosford Park helped fuel the fire. Ten years on and Owen claims he was never in serious contention. He was probably just a little too obvious (Connery clone with dash of Dalton).

History repeats itself: whilst Idris has similar qualities to Daniel Craig and Sean Connery, that’s almost too easy a play for the next iteration of this ever changing yet everlasting franchise. Once Daniel Craig finally leaves the 007 stage, chances are the visionary Producers may have to consider a more comic angle. Along the lines of Kingsman, perhaps (but using Bond’s own original style and a PG-13/12A rating)?

Elba belongs in the more hard edged Bonds that define the current era. He’s not a natural fit for a light hearted tone or pastiche romp. Why not try him as a rival agent to Craig’s Bond, allowing for a ‘shared universe’ approach that’s all the rage now? Just a thought. No. He’s already spoken for by Star Trek, Thor and Luther to name but three. My point exactly.