Music and film have always been intertwined. ‘Silent’ movies were backed by some sort of piano beat. By the 1980s and 90s a soundtrack was a fully-fledged product; teasing and supporting the content and sale of the film.

Studios have been more careful lately. A Hans Zimmer score has been the atmospheric go-to of choice; be it rom-com or big apocalyptic summer blockbuster. But last year’s Guardians of the Galaxy showed it’s possible to integrate an original yet familiar set of songs alongside score, thereby enhancing the whole movie experience.

But the REAL master of music on film in the last 20 years? Not a composer but a Writer /Director: Cameron Crowe. He synergised soundtrack listings to the movie’s mood in Jerry Maguire through Almost Famous, Vanilla Sky and Elizabethtown. His latest effort follows that tradition. 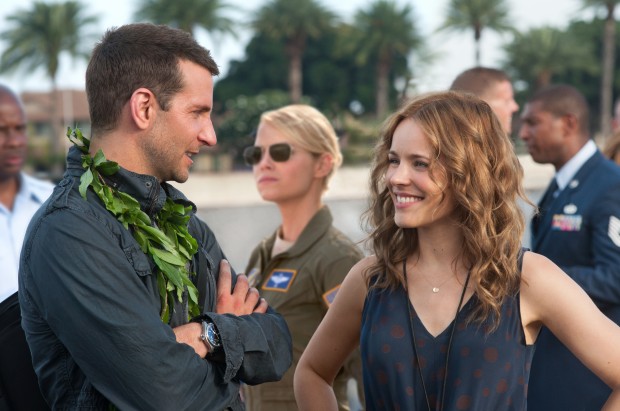 ALOHA, starring Bradley Cooper and Emma Stone, is released in May. It’s a classic Crowe caper: the romantic comedy template is taken and injected with pathos and maturity. There IS a feel good vibe and escapist sheen, but that’s earned rather than simply imposed on audiences.

The pitch: Bradley Cooper’s hero has suffered a career setback in the world of military contractors. He returns to an old territory from his earlier adventures to rehabilitate; encountering both an old flame (Rachel McAdams) and a possibly new love (Emma Stone). A dream-team of Bill Murray and Alec Baldwin represents the older demographic and provide comic and emotional impact.

The beats are familiar: Jerry Maguire featured Tom Cruise leave his job as a sports agent only to win his life back via the love of an initially unlikely muse in Renee Zellwegger. Elizabethtown had Orlando Bloom find himself and new love whilst attending a funeral. Those were both Cameron Crowe movies. There’s also a hint of Silver Linings Playbook here (not a Cameron Crowe film but a powerhouse performance from Bradley Cooper; his character finding new love via rehabilitation process, backed by great soundtrack).

So ALOHA is in some senses a kind of ‘Greatest Hits’ movie for the actors and director. But the wonderful thing about greatest hits albums is that every track is interesting and works well. The same is true of the actual soundtrack here. There are familiar beats; some new sounds and a comfortable echo of the locations in the film.

Above all, there is a clear thought process at work. Crowe and his team have invested emotionally in the choice of tracks; they have not simply raided the studio catalogue of vaguely romantic music (a Sony effort, such an approach would still have worked). This is the best of both worlds: familiar style and structure but genuinely original and enlightening sounds.

The first four tracks have a kind of period feel. It’s like South Pacific meets the Ink Spots. You are transported to sandy beaches and huts. You feel the beats of the movie. On one hand, it’s the re-location and new exploration of a hero, but it’s also him stepping back to step forward.

We then get a taste of reflective melancholy: protracted strings and what sounds like a range of guitar variations. This is the sound more of the south: could be at home in Texas, even. But it’s still got just that hint of Hawaii to keep things in the home of the film.

A gear change comes with the track I Know I’m not wrong. It has a vibrant energy and takes you into a dance hall atmosphere of upbeat optimism and romance, whilst retaining just enough hints of reflective thinking.  Then, I Can’t Go for That is like having the sea and sandy beach beam into your I-pod: a relaxing, 1980s vacation feel.

Take My Advice and Midnight Mix go a beat darker and feel very Vanilla Sky; (I did mention the film has pathos and a darker side). You get to earn the lighter sound, the pay-off being Let’s Go out Tonight (which has ‘end credits song’ written all over it).

Reflective. Rhythmic. Recommended. Welcome back, Cameron Crowe. The art of the soundtrack is reborn. Say Aloha!

ALOHA! Is released in May.

You can buy the soundtrack on iTunes!