JJ Abrams is playing a GREAT viral game, it seems. He SAYS no trailer is imminent. And yet, within a week we get:

AND: ENTERTAINMENT WEEKLY: A full feature, with a few juicy new morsels of information, notably regarding the motivations of the bad guys! Also, a look at the much anticipated return of everyone’s favorite scoundrel with a heart and a blaster, HAN SOLO!

So: whilst we MIGHT be getting a FINAL trailer at SOME point as a SURPRISE, we must ‘make do’ for now. To be frank, it MIGHT be an idea to hold off a third trailer until October? Possibly even just leave it altogether? The movie is gathering momentum already. We know it WILL break ALL Box Office records. It could even do TWO billion dollars! What we don’t want is a premature saturation in information. That kind of tactic has been known to smother and thereby kill a film’s prospects. But JJ knows people WANT more. So expect similar initiatives in the coming months: small bursts / tv spots / articles and THEN one big final push to the finish, headed by THAT final trailer.

The tv spot reveals nothing new in itself except an ominous, menacing and eerily evocative glimpse of the FIRST ORDER assembled in a snowy landscape. It is a striking visual that feels instantly memorable: a true work of art. Taken with the ENTERTAINMENT WEEKLY piece, we can now see that the villainy in the new film is formidable.

On one hand, everything is new and original (antagonists are not the old Empire: ‘First Order’ has own distinct aesthetic and leadership). On the other, there are JUST enough connections to the old trilogies’ mythology to satisfy fans. Note that KYLO REN (Adam Driver) is a Darth Vader fanboy fetishist, who has somehow come to revere the old symbol of evil in a bid to continue the legacy. Also note the classic Storm Troopers and AT-AT walkers and Star Destroyers. So whilst the universe has moved on in thirty years, technology has remained very much in the ‘used future’ mode which defined the original movies.

MOVIE VIRAL will keep you appraised on developments in the run up to the big event release of THE FORCE AWAKENS.

We have a good feeling about this.. 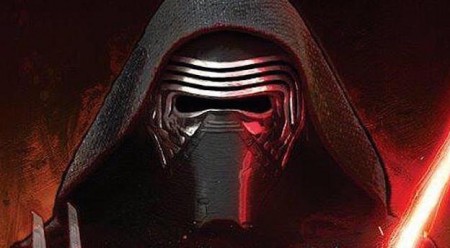