With Zack Snyder’s BATMAN V SUPERMAN: DAWN OF JUSTICE just around the cinematic corner (PG-13, by the way, if you are planning ahead) and the announcement that a WATCHMEN television series (possibly a prequel) is in the early stages of tentative pre production..now is the opportune moment to look at the cinematic event that was WATCHMEN! It was a risky film by any stretch of the imagination. But an R rated comic book movie CAN be done, as we are seeing with RYAN REYNOLDS in DEADPOOL next year.

I remember seeing the film on its release and also revisiting it on DVD a few times. It is visually stunning, that’s for sure, with excellent production design and lighting. And it’s blackly funny, satirical, shocking and dark. Also manages to be faithful to its period setting whilst remaining relevant. Great cast, too and a standout opening credit sequence.

Slight gripe: it was almost TOO faithful to the source material.

It felt like simply WATCHING the comic! In that sense, some liberty taken by previously mooted directors like Paul Greengrass and Terry Gilliam might have been more interesting: not necessarily ‘better’, just more interesting! Same way a Tim Burton SUPERMAN LIVES in retrospect MIGHT have been more compelling than MAN OF STEEL, despite undoubtedly posing a higher risk in its liberties with the source material. So, let’s see..does the WATCHMEN film stand up to scrutiny? Who Watches the Watchmen? NICK CLEMENT, of course. Over to you, Sir!…

Watchmen is as bold, risk-taking, and ambitious as a major studio event movie starring actors in spandex suits is going to get. Without the runaway success that 300 became, divisive but undoubtedly gifted director Zack Snyder was never going to be allowed to make a $150 million hard-R comic book movie.

Throughout the years, a diverse group of filmmakers including Joel Silver, Darren Aronofsky, Terry Gilliam, Paul Greengrass, and many others all tried – and failed – to bring Alan Moore’s wildly revered graphic novel to the big screen. The big-wigs calling the shots at Warner Brothers at the time of Watchmen’s production (the Alan Horn-era?) deserve some serious accolades, as this project could have been turned into a PG-13, watered-down version of its incredibly nihilistic source material.

And it wasn’t. I’m not judging the film version against the graphic novel. They are two totally different mediums, and what works in one doesn’t necessarily translate to the other. The big changes were A-OK by me, and quietly frankly, made a lot of sense from a cinematic point of view. I’ve read the Watchmen source material, and I never thought for a moment that what Moore put on the page would be exactly copied and transferred to the screen; this was not going to be 300 all over again, with a film that literally feels TORN from the pages of its original inspiration.

Back on opening weekend in 2009, I saw the film in the IMAX format and it was an overwhelmingly powerful visual experience. It was honestly too much to fully process on initial viewing, even with the benefit of having read the graphic novel beforehand. But over the course of multiple viewings and endless online discussions, I’ve been able to boil down all of the plot lines and key thematic discussions, with the visuals and action and special effects never losing their dynamic impact. Billy Crudup’s scenes as Dr. Manhattan are easily my favorite; the Mars interlude has an elegance to it that’s hard to describe. I’m stunned by the overall sense of design and visual sophistication of the film, especially the opening credit sequence, which dispenses with backstory and motivation in such an economical and purely visual fashion that it’s nearly impossible not to become immediately engrossed.

Set to Bob Dylan’s classic tune “The Times They Are A Changin’,” Watchmen opens up with a glimpse of our society that’s just a tad skewed from what we’re familiar with, all done in glorious Snyder-vision, showing the formation of the Minutemen, their eventual collapse, and the birth of the Watchmen, while providing a political timeline that expands upon this alternate universe – it’s visceral poetry in motion and one of the most startling openings to any film. Snyder seems to love the ability to literally turn a graphic novel into a living, breathing piece of moving celluloid, and Watchmen has a fantastic, surreal quality because much of it was done on practical sets and real locations, but also utilizing CGI environments and backdrops, giving the film a rough yet slick and totally heightened quality.

With Watchmen, he took a supposedly “unfilmable” graphic novel and made it – at least to my eye – into one of the most uncompromising, demanding, and insanely brutal superhero films that’s ever been attempted. There’s so much to sift through – the alternate political timeline, the subversion of the superhero genre, the blending of film noir with science fiction – Watchmen feels like an uncanny amalgam of 2001, A Clockwork Orange, Blade Runner, Dark City, Sin City, The Dark Knight, and the works of Raymond Chandler.

It’s a very heady brew, trippy and surreal at times, ironically campy in a few instances, always nasty, frequently kinky, and always interesting to experience. This is a one of a kind film that really stands alone within the space of the comic book film, and even though it’s not perfect, it’s so ambitious and at times downright hypnotic to watch that I find myself under its spell in no time whenever I put on the Blu-ray. 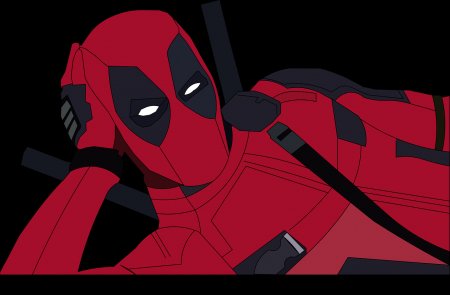 Korg and Deadpool: Together at last!

Korg and Deadpool: Together at last!