I am not exaggerating when I say that the loss of Steven Spielberg to the  fifth Indiana Jones film..is tragic. As in a missed opportunity, tragic.

As in something that should have happened, isn’t happening. As in a film will be made that retains the leading man (good: I love Harrison Ford as much as anyone) but little if anything else that made the series great?

It feels like a kind of strange betrayal by Spielberg? He was one of those who understood that any critical outlet (Schindler’s List, Bridge of Spies et al) depended upon the every commercial success generated from his still enjoying, embracing and making popcorn blockbusters.

He said as much himself as early as 1991/2. ‘It’d be a lovely world if everyone just made movies like Boys in the Hood and Driving Miss Daisy. But eventually? People would want Batman 5‘.

He’s right. Right then, right now: though it’s his Indiana Jones, not Batman 5 we want.

See, Steven also claimed around 2007/8 that he felt compelled to make more Dr Jones adventures as much out of duty to the audience as anything. Yes, he had made the first 2 Raiders sequels based on a duty to his old friend, George Lucas.

They’d shaken hands back in Hawaii. There would be at least 3, possibly 5 films. Steven would be George’s Director for hire, delivering whichever vision was requested.

That is why Temple of Doom went ‘darker’ : George wanted it that way. And it’s why there were aliens and a 50s sci fi paradigm shift for the Crystal Skull one.

That said? These pictures ARE signature Spielberg and his gift to the audience in a shared love of Cinema. They build on the fusion of epic adventure to economic production values that he mastered on JAWS. There is a Conan Doyle style swashbuckling spirit of endeavour to the pieces, similar to what he pulled off in the Lost World.

The body horror mixed with pulp noir you saw in Minority Report: it’s there in the Raiders pictures. One could also see the beginnings and then the development of Spielberg’s fascination with historical detail at work.

Yes, ok, the Nazis faced by Indiana Jones are nowhere near as serious or demonic as those depicted by Schindler’s List. And the wartime aesthetic of Saving Private Ryan is grim, unrelenting and devoid of hero saving the day fantasy.

And yet? Nazis are Nazis! You can see Spielberg’s hatred of them and how he translated that to their epic punishment at the hands of the wrath of God. All because of Indiana Jones!

Indeed, Schindler is in some senses, Indiana Jones in a more adult key? Both are initially soldiers of fortune and opportunistic rogues, given moral awakening in the face of evil.

Notice Temple of Doom: Indy witnesses child abuse and decides to take a stand, against all odds, to save them. Quite uplifting in its way, despite the myth about it being ‘dark’?

Now, albeit in differing key? Schindler, seeing that one poor girl in the red jacket, die at the hands of Nazi evil. And that catalyses, via visual shorthand, his vocation to fight against rather than simply exploit Holocaust mechanisms.

And ok fine: we do not see entrails shot out in rapid fire motion on a D Day landing beach in an Indiana Jones movie. Nor should we.

But we did get, perhaps for the first time? An hero who could take punches, bleed, bruise, fail, fall, mourn, get it wrong, grow old. He starts old and grumpy in his first film so frankly this can be played by Harrison til he’s 100, no problem.

So these are movies that, whilst escapist and childlike /adolescent in worldview, managed to confront rather than duck quite adult and profound realities and responsibilities.

All whilst educating us without lecturing, never losing the spirit of fun or pace or romantic adventure.

Even the much maligned Crystal Skull, manages to build on the family motifs and passing of time set up by Last Crusade. Indy’s beloved Dad and mentors have died, off-screen.

And his own qualities as a potential faithful husband/father are seemingly unreachable goals are coming to haunt him as he faces older age. ‘You get to the stage where life stops giving you things and starts taking them away‘..and with that..back into action! Older yes but still vital.

That precarious balance between domestic soap opera and saga (something Steven failed at with Hook, Always, Dad and War of the Worlds) just works best with Indiana Jones.

NOBODY can do that quite like Spielberg. These movies were as good to him and his needed outlet in the genre every bit as much he was for/to them. So yes, it is indeed a tragedy that he left this boat.

We don’t WANT him as ‘hands on producer’. This series is HIS signature! And yes, the mooted James Mangold will be able to do a solid job on the action, and even character beats. Le Mans 66 is one of my most favouritest films.

Except this Indy film won’t be like that ‘indy’ film: Indy 5 is not Indy 500. Expect lots of LOGAN style brooding /last mission motifs? Just a hunch, like. I don’t want that. The public certainly is not in need of yet another one of those long, drawn out, self indulgent death of an elderly hero pieces. Sorry!

If you HAVE to recapture vintage Spielberg..maybe Sam Mendes, Jon Favreau, Chris Mcquarrie, Peter Jackson or Matthew Vaughn could pull it off? But WHY? They have their own franchises, as should Mangold.

Spielberg IS Indiana Jones, every bit as much as Harrison Ford embodies the character. The visuals, the John Williams score, the academic pondering, the family sub plots, jungle /sea/desert-scapes. The nasty creepy crawlies, body horror, supernatural powers and good vs evil stakes via second to none action. PURE SPIELBERG!

So in the event that you are reading this, Sir, Mr Spielberg? PLEASE reconsider this. Unless of course you are ill, retiring or the script simply sucks (so sorry, if so?)..PLEASE come back and just make this movie. Even if it’s a summary swansong..it is your destiny to make it.

Give us one last roller coaster E ticket fun rise? Some optimism for a future where we age, yes but the adventure never ends.

A bit of magic dust from the past to cope with an uncertain present. Yes, it’s your DUTY!

Just do it. ‘Because in this sort of race? There’s no silver medal for finishing second!’.

INDIANA JONES 5 IS SCHEDULED TO ENTER PRODUCTION WITHIN 2 MONTHS. THE CLOCK IS TICKING..

JAMES MURPHY HAS TO GET BACK TO HIS UNIVERSITY.. 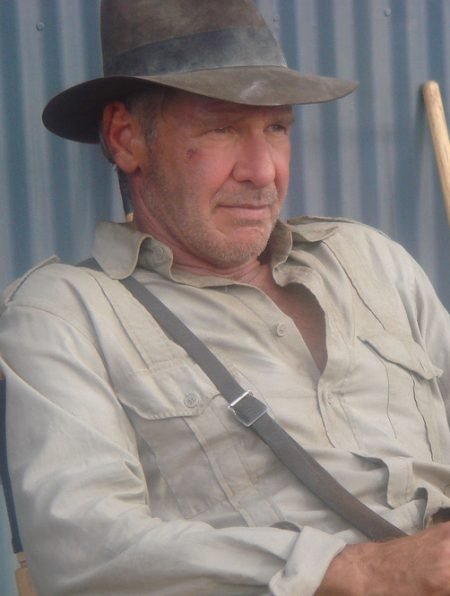