In a nutshell? STAR WARS TROOPERS? Ok, so context. David Lynch turned down making a Star Wars film but he did make the original DUNE adaptation.  In theory, the properties have lots in common. Sand! Stars! Space! Politics! Except that George Lucas‘ vision was rich visually and had a fairy-tale verisimilitude. That is why the Skywalker /associated character sagas remain hot IPs despite a few setbacks. But it’s also why the original DUNE failed, because it was attempting to compress a saga into one movie, in the days before franchise activation from pitch to shared universe via billion dollar box office validation were normal orders of the day.

By contrast, when Attack of the Clones /Revenge of the Sith tried to ‘do’ political analogy or when the Disney sequels either subverted or met Star Wars’ fans expectations..the results proved unremarkable.Where am I going with this? Well, this new remake of DUNE feels more commercial, innately, than the original. It has that Star Wars factor, whilst keeping its own original aesthetic. This is a pumped up war movie, thereby carrying politics without abandoning it or heavy handed didactic lectures as sub for plot. Bravo!

This looks visceral and real and immersive; urgent and raw and yet friendly to a nice fix of Christmas time popcorn. Things could still fail, though. Notice there is the Blade Runner 2049 factor. Same director: Denis Villeneuve. It’s an old IP that is not in the Star Wars league, despite some similarities. This aint Marvel or DC or even 007 (Denis almost toyed with making the film that became No Time to Die). So, if they pitch too big, especially post Covid limitations on visits to Cinemas? Then this might flop, and that is all the more likely if there is a lengthy running time or over-worthy, bottom numbing pace.

Could go either way. Cautious optimism, curiosity verging on almost excited though not quite ‘hyped’. 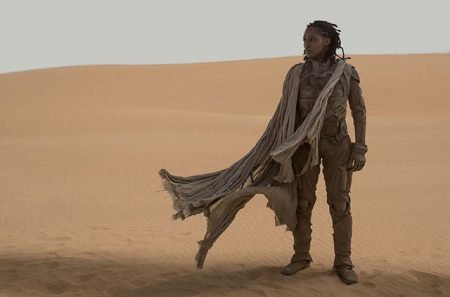